Help us defend the
cause of the fatherless


Enroll my church, or
enroll my son 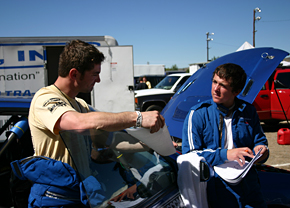 It was on a rock climbing wall at a gym in Casper, Wyoming in 2003 where Brian Scott’s life was changed forever. Little did he know that the young man he would randomly meet there would join him in a life journey far more adventurous than grips and footholds could offer.

“This kid and I became fast friends,” recalls Brian, who immediately connected with Justin Wollerman, despite their age difference. On that climbing wall Brian, a 30-something diesel mechanic, and Justin, an 18-year-old “climbing bum” were tied together not by rope, but by God. “God told me that I was going to help Justin,” remembers Brian. “I didn’t know where that would lead but I was willing to take it wherever the Lord wanted it to go.”

Fast forward a few months and Brian found himself in a rally race car with Justin – the teenager at the wheel and Brian sitting shotgun in the co-driver seat, wide-eyed and white knuckled! “Before I knew what had happened, Justin had passed one car and caught another on the first stage of his very first race of any kind!” exclaims Brian. “I just remember thinking, ‘this kid is a natural and he’s gonna get me killed!’” But death was not what the Lord had in store for the unlikely duo that day. Rather, he had set them both on a path to new life – a path that just happened to require hair-raising speed around hair-pin turns.

This wild adventure began with Brian responding to God’s call to help Justin, a confused, lost teen who was into little more than cars, climbing, and concerts. “He was an avowed atheist and certainly had no interest in God,” says Brian, who starting reaching out to Justin on a practical level with car repairs and climbing outings. When Justin’s parents divorced, Justin thought it was the best thing that ever happened because he got to do whatever he wanted, but it actually sent the young man down a path of self-indulgence. “He got to where he didn’t care, and just kind of gave up, dropping out of college and moving to Colorado Springs to climb. I understood what he was going through since I also came from a broken home,” says Brian, whose parents divorced when he was just six years old. “I recognized a heart wound in Justin, because I suffered from the same wound. My dad was in my life and saw me a couple times a month. But when a father abandons his family he abandons the right to tell his kids what to do. I lost my dad as a trusted counselor and it was devastating,” recalls Brian. While Justin was older than Brian when his parents split up, and the particulars were different, the impact was just as profound. “I remember thinking if I was him, it really would have messed me up,” says Brian. “I wish someone would have believed in me and helped me.”

Brian knew that God had chosen him to be that “someone” in Justin’s life. When the teen shared with him his dream to be a professional rally car driver, Brian knew what he needed to do. After discussing it and praying about it with his wife Hallie, the Scott’s committed to ministering to this young man, whatever the cost. And, the cost was beyond what they could have imagined!

In his third rally, Justin won the Open Class Amateur National Championship. “He got his professional racing license in three races, which is practically impossible! But, as Hallie kept telling him, nothing is impossible with God,” remembers Brian. Responding to the Lord’s leading to continue to invest in Justin’s life and dream, the Scotts sold their house and just about everything else they owned to help him race professionally. And as it turns out, they were ultimately the winners. “It was really deliverance for us – freedom from all of those things,” says Brian. In addition to finding freedom from the burden of worldly things, the Scotts were also given the opportunity to demonstrate to the racing world how success could be achieved without selling out to sponsors. “It is very expensive to race and most teams get corporate sponsors to foot the bill. They put up the cash and get the glory,” says Brian. “We wanted any success we experienced to be all God – it had to be Him doing it and not a sponsor with money. We wanted to use the car to benefit an orphanage in Africa.” So, they raced the car to raise money and awareness for orphaned children in Africa, not themselves. “Justin said that was the first time he did something for someone else than himself,” recalls Brian. That was a significant turning point.

It would take several more years and incredible sacrifice and on the part of Brian, Hallie and Justin before Justin came to know the Lord. But eventually, in fall of 2007, Justin accepted Christ as his Savior the night before a race in Colorado.

“For me it became this issue: One person is worth an inestimable amount of money. I got to experience that. It is true. One person is worth it!” declares Brian. “I did all of this to because the Lord wanted to save one young man…one soul…one life. I figured if that’s all I did in my lifetime that was worth it.”

But the Lord had more work in store for Brian. Through the racing adventure with Justin, Brian developed a heart for mentoring young men. He has since become the Missions Pastor at College Heights Baptist Church in Casper, WY, where he is leading a thriving Fathers in the Field mentoring program. He and numerous other Fathers in the Field mentor fathers are exploring God’s Great Outdoors with fatherless boys. In addition to outdoor adventure activities, mentor fathers are also connecting with high-school age boys through activities that involve building and operating motors and remote control cars. Their mission through Fathers in the Field is to help the boys understand that they have a Father in Heaven who will never leave them or forsake them. Ultimately, they hope to help these boys forgive their earthly dads, just as their Father in Heaven has forgiven them. One of the first mentor fathers joining Brian in this effort – Justin Wollerman!

Looking back on that day he met Justin on the climbing wall, Brian is convinced it wasn’t a random meeting, but rather an ordained appointment made by God. And, it wasn’t just about the life of a lost, lonely teen. It was about Brian and his wife, Hallie, too. “It transformed our life. It forced us to trust the Lord at new level and invest in someone else at a very high level. I wouldn’t trade it for anything.”