September 1, 2014 Defending the Cause: A Letter from One Mentor Father to Another 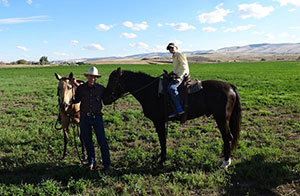 But you are a chosen race, a royal priesthood, a holy nation, a people for his own possession, that you may proclaim the excellencies of him who called you out of darkness into his marvelous light. 1 Peter 2:9 (ESV)

A cowboy at heart, Karl Brauneis learned a lot about the Creator of the universe by being immersed in it working in general forestry in Colorado, Montana, Idaho, and his home state of Wyoming. The father of three grown children is now retired, but works as a state fire instructor, information officer and is a member of an incident management team. He’s also the Mentor Father to Jacob (shown above with his Wrangler Karl).

I spent most of my career fighting fires and now I hope to light one. The fire that needs to burn bright with abandon is one of men stepping up to combat the alarming rate of fatherlessness in America. The statistic is growing as the number of men willing to mentor a fatherless boy is waning.

If you read no further, my challenge is simply this: Mentor Fathers, ask God to place on your heart another man for you to ask to join this ministry adventure with you. By multiplying one by one, the number of boys waiting in the wings becomes less immense. I encourage you to show a friend the ministry in action. Invite him along on one of your outdoor adventures and break the debilitating power of the unknown. The reward far outweighs the investment. In the midst of being a mentor, I get to be the forester, cowboy and outdoorsman God made me to be.

Jesus frequently said, “Don’t be afraid.” It’s as if He knew that behind our tough exterior lived trepidation, fear and a lack of faith. But a mustard seed is all that’s required to move mountains. To me, leading with that exhortation was the Lord’s gentle way to encourage us to let go of the weightiness of fear and the inertia that happens when we give in to it.

I appeal to you, man to man, don’t be afraid. Be a part of the solution to fatherlessness in America. The Fathers in the Field ministry doesn’t need more abandoned boys – those boys exist in high numbers and surround you where you work and live. We need more men to commit to mentor these boys from their passion for the Lord and the outdoors.

Many of you are Mentor Fathers and, like me, embrace the calling as a privilege. The great joy of serving the Father by mentoring my Field Buddy, Jacob, was an unexpected blessing when I committed in 2013. With three grown children, it gives me the opportunity to leverage my wisdom and years of parenting to help heal the hurt and fill the void in Jacob’s heart.

How can boys become men without someone to model true manhood? We need men to do for one what they wish they could do for many. Everything’s set up, written and designed for you to follow to be a part of Fathers in the Field. Instructions included! What the ministry manual lacks is the man living out loud in front of a fatherless boy.

As I prayed about this letter, God gave me two words. The first one is . In Jeremiah 1:5 it says, “Before I formed you in the womb I knew you, and before you were born I consecrated you; I appointed you a prophet to the nations.” It’s apparent God has something for you to do!

When I served as a smoke jumper, I parachuted out of airplanes to fight forest fires. We were a tight-knit group of young men. Each year, we would take the best of the “hot shots” to be candidates. During the four-week physical training, many would wash out. If you made it to the end and survived the scrutiny of constant evaluation, you would get your smoke jumper wings. We were chosen, but had to earn it.

Jesus went through all that training for us. We’re chosen and accepted without having to earn it. The price has been paid. If God chose me to do great things, why do I have to be so stingy with my time and resources? Why waste an opportunity to be my brother’s keeper? Why not live out the fruit of the Spirit in front of a boy in desperate need to see modeled love, joy, peace, forbearance, kindness, goodness, faithfulness, gentleness and self-control?

The second word God brought to mind was . I read a story about the Nazis on trial for war crimes in Nuremberg after World War II. An Army psychologist studied them and concluded that evil is the absence of empathy. I found that interesting as it relates to the Mentor Father – Field Buddy relationship.

Empathy is the experience of understanding another person’s condition from their perspective. It’s a response God placed within us. It’s the act of placing yourself in their shoes and feeling what they are feeling. It makes people more compassionate and helpful. Our culture doesn’t stress being empathic, it’s more “me” focused.

Many Mentor Fathers start at square one in developing empathy in their Field Buddy. It’s important for them to learn to think of others rather than just themselves.

When I took Jacob on a turkey hunt earlier in the year, it turned out to be more of teachable moment. Jacob ran into the rancher’s fence with an ATV. He didn’t understand why he had to take responsibility for what he had done and had no idea what to do to make amends. He never received this kind of instruction. I held him accountable and with that accountability and instruction, Jacob knew that I loved him. He knows that I care enough to hold him accountable when everyone else is giving him a pass. It’s a reflection of the verse in Proverbs 3:12 that says, “For the Lord corrects those he loves, just as a father corrects a child in whom he delights.”

My prayer is that we as Mentor Fathers aren’t stingy with the joy, the blessing and the influence we experience by serving the Father by serving the fatherless. And I pray that we consider inviting a friend to join us on the adventure and see the ministry in action. Just one will do to double the number of boys who get to begin a mentoring relationship with a man who is protector, provider and pastor of his family.

I love inviting younger men along with me and Jacob because when I do, Jacob thinks I’m even cooler to be around. Leverage and enrich your relationships with your brothers in Christ by having this ministry in common.

We love a God who had no home and yet we prefer comfort to taking a leap of faith. Can you imagine the freedom of trusting in the One who said we could move mountains? Do you not think we could help move the heart of a fatherless boy toward the Heavenly Father, too?

That is stuff of legends. Be one.