January 13, 2015 Defending the Cause: A Treasure Chest of Pictures 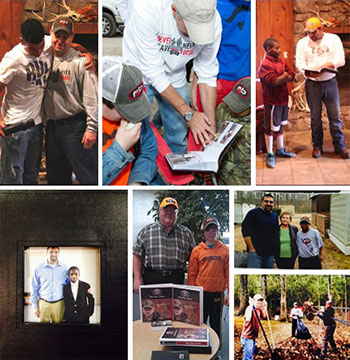 Pictures are not evidence of the story; rather they contain the entire story within one frame. Thus, photo albums become treasure chests that keep these pictures safe from the ravages of time, dust and decay. At the end of each year together Mentor Fathers give a treasure chest of pictures to their Field Buddy. They become the most treasured possession for a Field Buddy, as they might be the only pictures they have one day of a godly man in their life.

Fatherless boys suffer from an abandonment wound that causes them to struggle with self-worth. Their earthly fathers are uninterested, unknown, or gone. Men come in and out of their lives, and they learn that men will give them time but that comes with expectations. They are left asking, “What am I worth?”

When a Mentor Father enters the life of a fatherless boy he is saying “Son, you have value. You matter to me, to the Church and most importantly to God.” This man has signed a commitment to this boy. Yet it is the unspoken message of time spent together that speaks the loudest. For the Field Buddy this relationship isn’t about activities or teachable moments, but about time. A man of God is spending time with him. Being interested in his life; developing a friendship; being around on a regular basis and he has pictures to prove it.

Over the coming years these young men will look back on these photos and see the entire story of their time with their Mentor Fathers, captured in each photo. While the image of a day will bring back fond memories of people helped and trips taken, it will be the memory of the man that brings tears. For a boy whose life was marked with pain, frustration, sadness and unforgiveness before this man, this treasure chest represents a new chapter in life.

Even now, after their time together is over, this album brings the boy back to those times. A widow helped, a conversation had, time spent together. The tears well up in the boys eyes. Not tears of sadness, but of gratitude for a man willing to give of himself and of his time to matter greatly in the life of a fatherless boy.

The need for Mentor Fathers is great. Is God calling you to matter greatly in the life of a fatherless boy by giving him the treasure of time?