May 5, 2015 Defending the Cause: Battle on the Home Front – Heroes Needed

More than 25 million children are being raised in America today without the physical presence of a father. It stands as the greatest challenge of our day and the one issue that very few people want to openly discuss, yet it impacts our homes, schools, hospitals and prisons. In fact, it is associated with almost every societal ill facing our country’s children. Fatherless boys account for 72% of adolescent murders; 60 % of rapists; 67% of prison inmates; 71% of high school drop outs; 63% of youth suicides and they are 30% more likely to abuse drugs and alcohol. If fatherlessness were classified as a disease, the epidemic would quickly be declared the national emergency that it is.

With other national emergencies our government deploys troops and volunteer organizations mobilize individuals and groups to come to the aid of the affected areas. These men and women jump into action to help serve their fellow Americans. Our country refers to these people as heroes, because of their selfless actions. When Fathers in the Field mobilizes God’s people, raising up churches and men, to help heal fatherless boys and their families, we consider these people to be heroes as well. Mentor Fathers are like soldiers stepping into the front lines of this epidemic and working hard to help heal the abandonment wounds boys suffer when their fathers abandon them.

Mentor Father Ryan Dorn has served as a Weapons System Officer in the US Navy since 2007. He is a hero in every sense of the word. At work Ryan sits behind the pilot, flying an F-18f Super Hornet. Together they provide air support for US troops on the ground. In many ways they are the guardians of these troops, watching over them and doing their best to protect them from the enemy. When Ryan is home, the scenery changes but the job description is the same; he watches over and provides protection for his wife, four children and his Field Buddy Alex. In addition to being a fighter pilot and serving our great country, Ryan has answered the call to be a Mentor Father.

After reading the article on Fathers in the Field in the December 2103 issue of American Hunter, Ryan realized there was a battle raging here on the home front. He recalls, “The article stirred something inside of me. As a patriot I love this country of ours and rather than complaining about it falling apart, I wanted to fix it. The article pointed out the problem and presented a great way to fix that problem.” The article pointed out that when a fatherless boy’s hero, his father, abandons him he is left with a deep damaging wound. From that moment on he will struggle with self-worth and personal value; after all if his hero saw no value in him by leaving, what can he really be worth? So these fatherless boys wait for their father to return, to feel his arms around them and to hear the man say “I’m proud of you. Look at the man you’re becoming.” Too often it’s a dream that is never realized.

Growing up Ryan’s father was always there to lead him, to attend football games, to teach him about salvation in Jesus Christ and to encourage his son. As a father he intentionally gives this same love to his children, but it was when his son Ethan was born he realized how important a father is to his son. While his desire has always been to be the godly leader of his family that his Heavenly Father has called him to be, Ryan knew he had to help the fatherless boys in his community too. “Thinking about all the boys who don’t have dads who come home at the end of the work day and spend time with them. I wanted to do something to help these boys.” Driven by this thought he contacted Fathers in the Field and asked what he needed to do to start the ministry at his church. 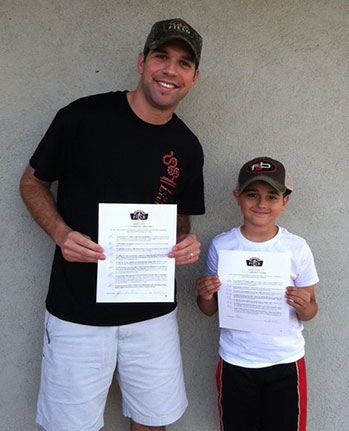 The leadership at South Valley Community Church in Lemoore California, Ryan’s church, agreed they needed to step up and help. As their first Mentor Father and Church Champion Ryan was given the privilege to mentor Alex. Mentor Fathers commit to taking their Field Buddy to church twice a month and working through a Journey Guide each month. The Journey Guide helps the Field Buddy learn about his Heavenly Father and about how God loves Him and will never abandon him. Since Alex wasn’t raised going to church, Ryan and South Valley Community have the honor of teaching him about God. Though Alex has been in the ministry only a short time he accepted Jesus Christ as his personal Lord and Savior on March 1, 2015. Ryan was elated that this young man had become his brother in Christ and immediately reached out to Fathers in the Field to share his joy.

We at Fathers in the Field encourage outdoors men to “trade in the nice set of horns for a boy’s healed heart.” Ryan exemplifies what it means to answer this call. He is hero to our country because he willingly puts his life on the line to protect the freedom of men and women he will never meet. Yet he has gladly traded this definition of hero, to be the hero of a young boy who needed a godly man to step into his life and matter greatly. Alex’s life is radically different and will continue to be forever changed because of one man and one church.

When asked what message he wants men to hear, Ryan said “If we want to see a change we need godly men and we need them right now. We always say God do something, but he’s looking to godly men to work through. If you want God to do something, godly men need to step up and take action.”

What about you? Will you see fatherlessness in America for what it is – a national disaster? Will you respond by helping?

Contact us today and help get this life changing ministry started at your church.