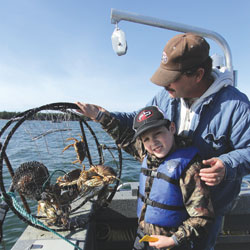 It was a glorious fall day off of the coast of Oregon—a bright blue sky, crisp autumn air salted with the ocean spray, and the excited sounds of young boys netting their first-ever catch of Dungeness crabs. “The boys loved it!” exclaims Bill Roady, who, along with three other Mentor Fathers, took their Field Buddies on a Saturday-morning adventure that yielded far more than that night’s dinner.

“It turns out that Ezra had been asking his mom if he was ever going to have a daddy, since he had never met his dad (Ezra was abandoned by his father at birth). His mom, Monica, responded in faith by telling him that God would put a godly man in his life if they started praying about it,” Bill says. Monica shared their prayer with friends who were involved with the Fathers in the Field ministry at Lighthouse Christian Church in Warrenton, Ore. They immediately thought of Bill, who, along with his wife, Shirley, was childless.

“This is about building relationships and trust,” says Bill, who distinctly remembers the day he met 8-year-old Ezra in early 2011.

The next week, Monica and Ezra attended Lighthouse Christian Church and someone pointed Bill out to Ezra. “He came right up to me, looked straight up at me, and said, ‘Are you going to teach me how to shoot a rifle?’” Bill laughs. “My heart just melted.”

Ezra instantly took to Bill, eagerly anticipating each of their get-togethers and rarely leaving Bill’s side on their outings. “He won’t play with the other kids because he is so paranoid of being left. He’s getting better as he begins to trust me. But he really does have a fear that I’m going to take off,” Bill says, who knows that in the early part of their relationship the primary goal is to earn Ezra’s trust. As he does so, Bill is hopeful that he will be able to help Ezra heal his wound of abandonment.

“I have asked him how he feels about his dad,” Bill says. Ezra’s reply: “Oh yeah, I’ve forgiven him. It’s his loss, not mine.” But Bill is certain that the boy is only masking his true pain. “To have real healing, you can’t bury your feelings,” Bill says. “You have to expose them and ask Jesus to help heal them. You have to recognize that you are wounded and then ask Jesus to heal that wound. I am confident that Ezra has a lot of healing to do.”

Through spending time together, building a trusting relationship, and studying God’s Word about forgiveness, Bill prays that one day Ezra will truly forgive his dad and experience freedom from his abandonment wound. In the meantime, the two are enjoying the blessing of a relationship that neither has ever had. “Ezra’s fatherless but I’m childless. It’s as much of a blessing for me as it is for him,” Bill says. “Through Fathers in the Field, I have had the opportunity to share my skills and knowledge that I wouldn’t otherwise have the opportunity to pass along to a son.”

On their crabbing expedition, Bill remarked to Ezra, “I think it really stinks that your dad left you.” Ezra’s response: “Yeah, but God blessed me by putting you in my life.”