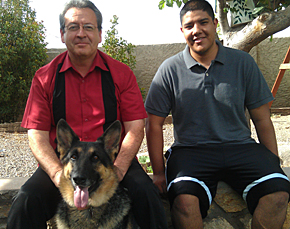 You never know when you are going to walk through a door and meet a person on the other side who will change your life forever. For Damian Lopez, it happened the day he walked through the door at The River of Life Church in Deming, NM and met Pastor Cesar Chavez (pictured together in accompanying photo).

“He took me under his wing and became like a father to me,” recalls Damian, who began attending the church several years ago as a lonely, confused teenager whose dad stepped out of his life in his early teens, just when a boy needs his father most.

“I couldn’t understand why my father didn’t care about me,” says Damian as he reflects on his dad’s lack of interest or influence in his life. Like many fatherless boys, Damian pushed himself to the physical limits just to get his father’s attention. “I tried harder to excel in sports so I could have a good reason for my dad to come watch and take an interest in what I did. I would even try hard to get my name in the paper so I could say, ‘Look dad, you should come watch me.’

Despite his attempts to win his father’s attention, Damian rarely experienced the satisfaction of seeing his dad proudly cheering him on from the stands. The disappointment was crushing. “I didn’t feel like I was worthy of his love,” recalls Damian.

While struggling to deal with his own wound of abandonment, the teen was further burdened with the responsibility of filling the father void in his younger brothers’ lives. “Growing up as the older brother in the fatherless home, you are expected to assume that role. But I didn’t know how to do it because I had no role model. And not only did I not know how, but I didn’t want to do it.”

His introduction to The River of Life Church and Pastor Chavez couldn’t have come at a more critical time in the life of the teen and his family. There, under the care of the congregation and the mentoring of Pastor Chavez, he learned how to relate in a godly way to his brothers.

“I was being really strict with them—that’s what I learned from TV,” remembers Damian. “But what I saw in church was discipline with love. I looked around at the godly father/son relationships in the church and I saw a difference—more of an open, respectful relationship. I can’t be a father to my brothers and they don’t look at me that way. But, now I know how to be a better big brother, and that is making a big difference in them.”

His youngest brother struggles the most with his abandonment wound, which Damian has learned to address honestly and openly through his own mentor relationship with Pastor Chavez. “Before, I didn’t know how to approach him. But now, knowing the unconditional love of God and having the example of pastor, I can talk to him,” said Damian. “At first, he was hesitant to talk with me about it. But, now he’s starting to open up. I wouldn’t want him growing up feeling unworthy and have a hateful heart for his father.”

Damian, himself, struggled with a bitter heart toward his dad until Pastor Chavez challenged him on his unforgiveness. “He really showed me that I was trying to fit my dad in a hole that I wanted him to be in. I just needed to forgive him and tell him I love him no matter what. I was able to talk to my dad and let him know I had forgiven him.”

With that guidance, encouragement, and accountability that Pastor Chavez has offered, Damian has found a peace he has never known. “I can be at peace because I have forgiven my dad. Pastor taught me how to do that,” says Damian. “Unconditional love is what pastor showed me and what our Heavenly father has for me.”

For that, Damian gives thanks to God. His life, and the lives of his brothers are forever changed. He also praises God for the day he met Pastor Cesar Chavez. “At first I was hesitant to embrace his acceptance, just because my dad had failed me. I had a hard time trusting. But I eventually opened up and I feel really good that I have a male figure to go to. He prays for me. He counsels me. He sets me in the right direction when I stray off the path.”

By sharing his story with us, Damian hopes to encourage men in churches across the U.S. to be prepared and willing to accept the opportunity to mentor a fatherless boy. “You never know when that will come but when it does, you can change a boy’s life. I think people take for granted the imprint they leave on a person’s life. It’s important for men to invest in a boy’s life and leave an imprint for the better. And it may turn into a lifelong relationship like I have with pastor.”