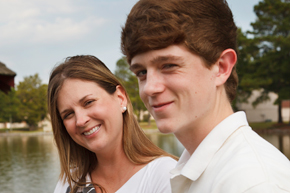 Daphne Steed remembers back to a time when her son, Taylor, lit up a room. “Taylor was a happy, joyful baby,” she recalls. “Now he’s quiet and reserved. I don’t think he knows yet what is hurting him,” Daphne says. But this single mom is confident that Taylor’s pain is rooted in a wound left deep within his heart even before he was born—the wound of his father’s abandonment which has turned a joyful little boy into a withdrawn, self-critical 15-year-old young man. “He pursues excellence and when he falls short of that, he’s very hard on himself,” Daphne explains as her voice and heart drop. “Like this year, he has all 100s except one 98 in history and he was upset by that.”

That relentless drive for excellence is an all-too-common behavior for fatherless boys who pursue perfection in the vain hope of proving to their absentee dads that they have value and worth. “I have told both of my kids many times that they are valuable,” says Daphne, whose 10-year-old daughter, Chloe, was also abandoned by her father. The single mom admits that she has made some poor choices in life that have resulted in pain for her children. One can almost hear her heart break as she describes how she tried to heal her kids’ hearts through words of encouragement and earthly things. “I told them they were not rejected by their dads because they are bad kids. It’s their dads’ problems,” says Daphne. “And, I have probably gone into debt trying to buy them things to make up for it.” But she has learned that neither her words of encouragement nor anything else that she has to offer as a loving mom can heal the abandonment wound. “It’s only something that God can heal, restore, and put back together. The Lord finally let me see that’s not something you can do. A mother is a mother…she can’t be a father.”

God used caring members of Daphne’s church in Brandon, MS to open her eyes to Taylor’s need for a godly father figure…and then to answer that need. When Taylor was about seven, an elder in the church stepped up to mentor the boy and take him fishing and to ballgames. Unfortunately, the elder eventually moved out of state and Daphne was left wondering who would come alongside her son who was now approaching his teen years and help him become the godly man that she desired him to be. God’s answer: Keith Polk and a brand new ministry called Fathers in the Field (see the Hero Highlight in this issue for Keith’s story).

“I loved that Fathers in the Field was an organized ministry that included Bible Study and service projects, as well as hunting. And, that each month Taylor would earn a journey gift,” says Daphne. “What was even more incredible was that Keith, Taylor’s new Mentor Father, lived right down the street from us. We were neighbors and didn’t even know it!” exclaims Daphne as she marvels at God’s perfect ways and timing. “It’s definitely been the Lord who knows that these teenage years are probably some of the most difficult for a boy and his mom. Keith has stepped in and has taught Taylor so many things that Taylor would have never known. My son killed his first deer and first turkey with Keith. They’ve gone fishing and camping. They go out to eat sometimes and Keith will let him get the biggest steak he wants (laughs). He taught Taylor how to change the oil in a truck,” Daphne says with increasing excitement as she thinks about all that Taylor has learned from his Mentor Father. “I couldn’t have done any of that with my son,” she concedes.

While all of the cool “guy things” that Keith has done with Taylor—hunting, fishing, camping, oil changes—delight her heart, Daphne knows that Keith’s love for the Lord and the way he models that for Taylor is what will heal her boy’s heart. “I believe God will heal and restore Taylor’s heart. And, I believe He is doing that through Keith Polk who loves Taylor like his own son,” says Daphne, who views Keith as the kind of man she would like her own son to turn into—a hard working man of integrity who loves and cares deeply for his own wife and family. “Keith is teaching Taylor how to be a godly man, walking beside him and showing him that there are loving dads. Taylor is seeing how God can restore your life and your family. It has made all the difference in the world in my son’s life.”

The predominant legacy left by a father who abandons his son is another generation of fatherlessness. The son repeats his dad’s sins, fathering and then abandoning his children. Daphne recognizes that this is the legacy that Taylor’s earthly dad has left for him. “Taylor’s biological dad was abandoned by his own father and he repeated the cycle with Taylor.” But she is hopeful that, with God’s help through Keith and Fathers in the Field, the generational sin of father abandonment will end with Taylor. “I believe that God will break the cycle of abandonment with Taylor whose fatherly model is now Keith. I think that if/when Taylor gets married, he is going to want to do everything with his kids,” says Daphne.

At 15 and several years into his mentoring relationship with Keith, Taylor still has a ways to go in finding healing from his wound of abandonment. Some days, it is still almost more than Daphne can bear to see her once joyful son now so sullen. “Sometimes my heart is just so heavy,” Daphne admits. “But I just look back through the years and see how the Lord has blessed us and given us what we need to make it through each day, says Daphne. “Fathers in the Field is probably one of the things that I will always be most grateful for in my life. I know the difference that it’s made. Even the burden that it has taken off of me … just knowing that Taylor knows God loves him because of how Keith, his Mentor Father, loves him,” Daphne remarks, her voice reflecting the deep sense of relief she feels in her heart. “Fathers in the Field is just a wonderful program for boys because moms don’t know how to do these things with their boys. I know the man who founded it had to have lived that life to know what boys need and the things they miss out on when it’s just them and their mom.”

Editor’s Note from John Smithbaker, Founder of Fathers in the Field: I want to express our deep-felt gratitude to Daphne Steed for sharing her story. It takes great courage in today’s culture for a single mom to admit that she can’t be both mother and father, and then to pursue godly role models for her children. We honor Daphne for her courage, wisdom, and daily commitment to ensure that the cycle of father abandonment ends with her family.