My Grandson Devin wondered if his life had any value in this world; he struggled to find reasons to go on living. It was the love and compassion he received from Fairview Baptist Church in Columbus, MS and the ministry of Fathers in the Field that saved him.

It is through tears that Gina tells of the hurt that her grandson has experienced in his short 11 years of life. Here is a boy whose mother struggles with drug addiction and the poor choices that so often accompany this life style. Sadly many of those poor choices have directly impacted Devin and caused great pain and anger in this young boy. Yet through all of these hardships God has given Devin some amazing gifts.

The first gift is that of a loving grandmother. Gina has been fighting for Devin since he was born and it was discovered his mother had been using drugs during the pregnancy. This wonderful grandmother was told years before Devin was born that she was dying of cancer and that there was less than 4% chance she would survive. She beat those odds by the grace of God. “When I beat the cancer I knew God had saved me for some purpose. When Devin was born and the state put him in my care I knew that he was the reason; caring for this boy was my purpose for still being here.”

There have been a myriad of struggles since that fateful day. Devin’s mother came back into his life bringing a whirlwind of devastation with her, leaving Gina to repair a new set of problems. Devin’s father, who spent most of Devin’s life in jail, was recently murdered. This 11 year old boy has lost so much and yet he is blessed with a loving grandmother. In the midst of pain and anger Gina sees his needs: “A boy needs a man to lead and guide him and as much as I love him I cannot be all things to or for him. So in September of 2016 when his counselor told me about Fathers in the Field I was so excited. Soon after we were contacted by Mr. Kevin who explained the ministry to me and promised to work hard to find a Mentor Father for Devin.”

Kevin Drewry and Fairview Baptist Church in Columbus, MS are the second gift. Kevin is the Southeast Regional Missionary for Fathers in the Field and Fairview Baptist is his home church. When Kevin heard Gina and Devin’s story he and the men at Fairview worked tirelessly to get a Mentor Father for Devin. Gina recalls that “Mr. Kevin kept in touch with Devin on a regular basis and the people at Fairview Baptist treated us like family. Please understand we didn’t attend this church, but they treated us like we had always belonged to them. They continue to be a huge blessing in our lives in countless ways. God has blessed Devin with the example of Godly men caring for people in need.” 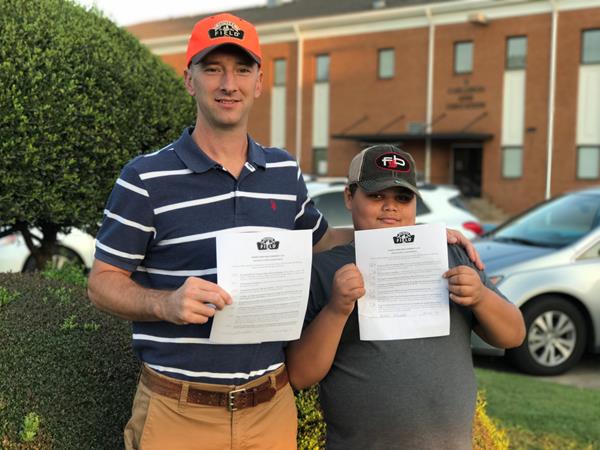 It took a year, but in 2017 God gave a third gift to Devin, Mentor Father Jesse McCulloch. Fathers in the Field starts each year with a commitment Signing Ceremony.

It is here that the Mentor Father, single mother / grandmother, and Field Buddy all commit to one another for the coming year. Gina recalls the excitement Devin expressed about this momentous day.

“Devin had been waiting so long for this day to come. Mr. Kevin kept encouraging him while they were searching, but here was a man who was committing directly to Devin and he was so excited. He was all smiles then and he and Mr. Jesse bonded right away. Devin is always ready well before Jesse comes to get him and cannot wait for the next time they will get together. It’s a blessing to see his joy.”

As a fatherless boy I understand the heartache and anger that Devin struggles with; as a Christian I also know the amazing love of my Heavenly Father. I truly believe that the fourth gift God has waiting for Devin is salvation through Jesus and an understanding of what it means to be an adopted son of God. This is the best gift of all and Devin will come to understand this through the intentional time he spends with his Mentor Father Jesse and I know this is Jesse’s desire for Devin too.

When God laid this ministry on my heart more than 12 years ago I knew He would change the lives of fatherless boys like Devin. God’s gifts of salvation and forgiveness are so amazing and yet there remain more than 13 million fatherless boys in our country that have never experienced them.

I want your help to change that. Contact me today and we can get started.