July 6, 2013 Defending the Cause: Do for One – Mentor Father Damon Peary, Bozeman, MT 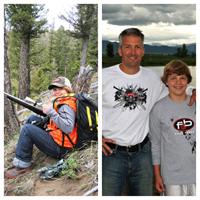 The King will reply, ‘Truly I tell you, whatever you did for one of the least of these brothers and sisters of mine, you did for me.’ Matthew 25:40 (NIV)

The one bear allotment for spring bear season by a hunter as regulated by the Montana Fish, Wildlife & Parks was filled May 11 the day Mentor Father Damon Peary and his Field Buddy, Christian, hiked a couple of miles into the Bridger Mountains north of Bozeman, MT. It was there that they encountered an old black bear in the mountains named after “Jim” Bridger, a notorious mountain man, trapper, scout, and guide who explored the West from 1820-1850.

Considering the upcoming eighth grader and exceptional freestyle skier feels more at home in the Bridger Bowl than in the Bridger Mountains, tagging a bear on his first day out as a licensed hunter was a proud moment for Damon, an avid hunter and fly-fisherman.

“It was a great hunt – truly a gift from God,” said Damon, a member of Springhill Presbyterian Church and president and CEO of Summit Corporate Services, an outsourcing company based in Bozeman that assists medical device start-ups with customer service, billing and sales support.

The East Coast native migrated with his work and family to Montana nine years ago allured by his love of the outdoors. “I wanted to live in place where we could have a great quality of life outside of work and we found it here,” said Damon.

Springhill’s Church Champion Chuck Raches shared the heart of the Fathers in the Field with Damon who, six months ago, committed to becoming a Mentor Father. “Chuck called and told me he had a boy in mind,” said Damon. “I have four kids between the ages of 10 and 15 which obviously keeps me on a busy schedule; but I have a heart for kids and a desire to make a difference. Fathers in the Field is a great opportunity to give back by focusing on one person in need.”

Throughout the New Testament, Jesus always did for one what He wanted to do for many. What you do in the life of one boy as a Mentor Father, Church Champion or Donor has eternal significance.

Damon and Chuck met Christian and his mom, Kim, over pizza and discussed the time commitment and what the core of the Mentor Father and Field Buddy relationship is all about – Christ Jesus. “After our discussion I asked, ‘How about we do this?,’” said Damon. “We then shook hands to affirm our commitment to each other and from there I jumped in.”

But Christian did not. It’s taking time to get Christian on board, do his Journey Guide assignments, show up at planned activities, and progress in the relationship. But Damon understands it’s about setting a good example and pursuing the relationship despite the immediate outcome. “I know it’s me that needs to be consistent – Christian’s commitment will grow as he sees I’m dependable and here for him” said Damon. “Part of my role is to show him what it means to give our word to someone.”

Damon and Christian schedule weekly calls and get together every other week. “I also try to get him to church at least twice a month,” he added.

Damon empathizes with Christian as he, too, grew up in a broken home. He was three years old when his parents divorced and lived in an orphanage and foster homes until he and his brother moved in with their father and new wife. When Damon was Christian’s age, he accepted Jesus as his personal Savior during a campfire night at a Christian camp in Pennsylvania. Damon didn’t meet his mother until years later after he graduated from college.

“I tell my kids they are so fortunate to have a stable home where their parents love each other,” said Damon. “Despite my upbringing, I always felt God had His hand over my life. He was always there. I want Christian to have that kind of understanding of God’s love and Fathers in the Field is a great tool for me to share it.”

“Wow. It is still unbelievable to me that Christian got a bear on his first hunt out as a licensed hunter! The photo brings tears to my eyes. He looks so happy! I’m really proud of him, and I’m also very grateful to you to give him the opportunity to have this experience. It wouldn’t have happened without you. Thanks again, Damon. We truly appreciate everything you do!” – To Damon from Kim, Christian’s mom