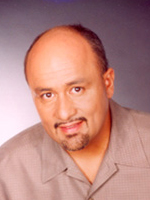 The abandoned boy’s eyes darted to and fro in a frantic search for his father. “Dad!” he called out. No answer. “Have you seen my dad?” he asked the man standing next to him who could only shake his head no. The panic-stricken boy looked into the sea of faces in front of him…not there. He scanned the parking lot behind him…no sign of dad. “Where is he? What am I going to do? Who will stand by me?” he thought to himself. Then, out of nowhere… “I’m here for you,” he heard the stranger say. “If your dad doesn’t show up, you can count on me.”

Joel Garcia remembers it like it was yesterday. The same feelings that race through the heart of a little boy lost in a shopping center raged through the 17-year-old football player’s heart and mind—panic, confusion, fear. For years he had looked forward to this night on the football field at Yuba City High School in Northern California. Every fall the senior players would take to the turf at halftime with their proud dads for the father/son recognition ceremony. Joel, a hopeful teen who desperately wanted his father’s approval, considered it a rite of passage. His dad was a hard-working man who provided for his family, making sure that their physical needs were met. But, when it came to offering emotional and spiritual support and guidance, Joel’s dad was a “no-show.” The teen ached for his father’s affection and was certain that finally, in this moment, he would win it. This would be the night when his dad would publicly proclaim his love and support for his son. Sadly, and unbeknownst to Joel, his father made other plans and went out drinking with his buddies instead. Joel was left to fend for himself on the field.

“At the last minute, this guy who I had never really met said he would stand in for my dad,” remembers Joel. “The announcer called my name and my dad’s name and this stranger put his arm around me and walked me out onto the field. When my father abandoned me, that man stood in the gap. I will never forget it.” It was a defining moment for the teen when abandonment and rescue intersected in the deepest channels of his heart.

He would find himself in the middle of that intersection time and again in the coming years. The first was in college when he realized that he was lost in the world without God, and he accepted Jesus Christ as his Lord and Savior. The abandonment wound deep within Joel’s heart began to heal as he learned that he had a Father in Heaven who loved him and would never leave or forsake him.

The second time came years later when, watching his own son take to the football field, the pain caused by his own father surged through his heart again. “God forgave me and freed me from my sin; yet I was still bound by my hatred for my father,” recalls Joel. He wrote to his dad, asking for forgiveness and offering his own. Once again, deep within that wound of abandonment, Joel experienced healing. “I’m not angry at my dad anymore. And, now I have a burden to reach fathers and sons,” says Joel who is passionate about encouraging dads to be more than providers in their families. “My story shows that you can be there and not be there as a dad. Kids can have a father in the home and still suffer from abandonment. They need to know that dad will not only put food on the table for them, but will love them and be there for them emotionally and spiritually.”

Joel recently shared that advice with his daughter and son-in-law who are expecting their first child—Joel’s first grandchild—later this year. His eyes fill with tears as he considers the wounds of the past and looks forward to the future. “I’m hoping the next generation can look back and say ‘We had a grandfather who changed the pattern of our family’s life. We are a healthy family because my grandfather and grandmother invested in us.’”

Today, Joel is passionately serving the Latino community of Las Vegas, coming alongside teenagers—many of whom have been left behind by society, the educational system, and their families—to help them build a more hopeful future. Joel and his wife of 25 years, Robyn, have three grown children and are looking forward to helping raise the next generation of their family. They are also strong supporters of Fathers in the Field. “I deeply felt the impact of a man standing in the gap for my absent father and it made all the difference to me,” said Joel. “I know that when a Mentor Father does that for a fatherless boy, eternity opens up for him.”