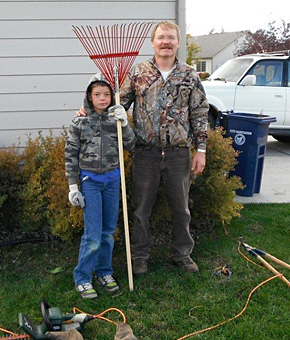 As a family physician, it’s not uncommon for Dr. Larry Sonnenberg to treat members of the same family in all ages and stages of life at The Bozeman Clinic. About seven years ago, Larry treated the grandson of patient, a toddler named Jonathan, with croup. The respiratory problem the boy faced then is nothing like the problem of growing up without a father and mother now – a problem without a godly remedy until the family doc turned his patient into a Field Buddy.

Jonathan was no more than two years old when Larry treated his medical condition. Little did he know the house call made in 2005 would be the first of many weekly visits he would later make, not as 9-year-old Jonathan’s physician, but as his Mentor Father. Visits now intended to help guide Jonathan into manhood and help him along on his Christian journey. (At the heart of the Fathers in the Field ministry along a boy’s spiritual journey is addressing his abandonment wounds over time and reinforcing the need to forgive his earthly father.)

Arranging circumstances as only God can do, Larry and his brother were deer hunting on Jonathan’s grandmother’s property seven years later. Not only was the vivacious 78-year-old Sharlene raising horses at her age, she also was raising Jonathan alone. Although Larry knew the family’s story, it was witnessing Jonathan throw a tantrum that day when it struck him the boy didn’t have a father figure. He feared how the story would end. The boy needed to be around a man.

“I felt I was being lead to take him to Sunday School,” said Larry. “That first Sunday with Jonathan, Chuck Raches presented the ministry of Fathers in the Field. ‘Four contacts a month’ and I thought Sunday School. ‘Service projects’ and I instantly thought about the projects my wife Wendy and I were already organizing with our youth group. Then, when Chuck got to the outdoors part I thought, ‘I’m always out hunting and fishing.’ Fathers in the Field seemed like the perfect way to provide Jonathan with opportunities for fun, support and time away from grandmother.”

Larry said yes to the opportunity to mentor a fatherless boy choosing Jonathan with the blessing of his wife Wendy and his own son, Ben. “I wanted to ask Ben, who had just gone off to college, if it would be OK. I wanted his support, affirmation and to include him in the process since he knew Jonathan.”

Every Saturday night, Larry calls Jonathan to make sure he’s up for going to church. “I try to be a constant in his life – someone he can rely on. That weekly call is an important part of my mission. Every time I call, I hope he’s receptive. The more encounters you have with your Field Buddy, the more likely he will be.”

Larry and his wife, Wendy, see beyond the three-year commitment made to Jonathan through Fathers in the Field. “Knowing Jonathan’s father may not be in the picture, we know we may be in this for the long run,” said Larry. “Wendy and I don’t focus on the time left; we focus on the young man who may need us indefinitely.”

Larry believes the most important things to give when serving in a ministry like Fathers in the Field is your time and your faithfulness. “When a boy realizes he can trust and rely on you, it provides an opportunity for you to build a relationship. During that process, he can learn about the Father in heaven because he’s seen the attributes and love of Father God through you.”

The time Larry’s spent with Jonathan hunting gophers, fishing for rainbow trout and trimming bushes in a lady’s yard help prepare the way for bible study by allowing transparency and questions like “how can I be sure I can go to heaven?”

When Jonathan asked Larry that exact question on a ride home several weeks ago, Larry simply referred to the memory verse from their last bible study, John 3:16. After a perfect recitation of the passage, Larry succinctly asked, “Does that answer your question?” “Yep!” was Jonathan’s reply.

“It great to see how everything is coming together – he’s connecting the dots,” said Larry.

Larry understands the importance of getting involved in things to keep Jonathan on track and away from the path filled with despair. “I feel like these kids are vulnerable,” said Larry. “I believe as Mentor Fathers we can make in difference one relationship at a time, one boy at a time.” Larry’s mentor was his mother. Living on a North Dakota farm, she made self-sacrifices and monumental efforts to get her eight children to church every Sunday, accept Jesus as their Lord and Savior and be confirmed. Larry realized later in life how much his early exposure to the person of Christ through his involvement in church would be just as important for his own kids and boys like Jonathan.

On Sunday, April 22, in a remarkable testimony to God’s faithfulness, Jonathan is getting baptized. The once rambunctious boy, now more of a calming influence on his peers than an instigator, is charged with reading his testimony in front of the entire congregation of Spring Hill Presbyterian Church. After receiving the blessing of Jonathan’s grandmother and incarcerated father, Larry and Jonathan met last week with their pastor to confirm the boy’s decision for Christ.

“If I was giving another Mentor Father encouragement, I’d say Fathers in the Field’s Kingdom work is a really a matter of perseverance, investing the time and relying on God’s faithfulness,” said Larry. “I pray I’ll have the energy and Jonathan will have the enthusiasm to stay on the journey. It’s imperative we stay faithful to these boys.”