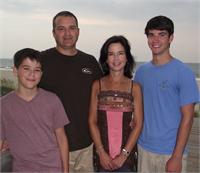 You are the light of the world. A town built on a hill cannot be hidden. Neither do people light a lamp and put it under a bowl. Instead they put it on its stand, and it gives light to everyone in the house. In the same way, let your light shine before others, that they may see your good deeds and glorify your Father in heaven. Matthew 5:14-16

Greensboro, NC native Bobby Davis knows about lighting the world, specifically the East Tennessee region. He is the agency principal of Lighting Trends in Knoxville, TN, a company he bought six years ago representing more than 100 lighting companies. Bobby’s company provides a sales channel for these companies throughout the region and surrounding states, marketing and selling their lighting to the masses.

When Bobby can’t be outdoors, he likes to unwind by watching outdoors or sportsman programming recorded on his DVR. Last year, he saw an ad for Fathers in the Field. He ran back the commercial for his wife to see. Through the ad, God helped him answer a question he had been challenged by his men’s bible study to think about: What are you going to do with your passion? Bobby heeded the call and contacted John Smithbaker who immediately connected him with Kevin Drewry, Fathers in the Field’s regional missionary director for the southeastern United States.

“Kevin and I hit it off right away. We scheduled a time for him to come to Knoxville last fall to stay at our house while he reached out to area churches,” said Bobby. “I’m trying to help him get the ministry into other churches, but now am serving the ministry through giving. We are God’s money managers not owners, so giving is a vital part of being a faithful steward of what God entrusts to us.”

Before Gena and Bobby got married they committed to stay out of debt. The wise counsel came from Bobby’s father, wisdom Bobby hopes Mentor Fathers teach their Field Buddies about. “God talks about money a lot in His word,” Bobby added. “You have to learn how to manage what you’ve been given first before you can start giving it away.”

A milestone in the hearts of Bobby and Gena came when participating in a Sunday School class in their home church in Greensboro when their two teenage sons were little boys. Dr. James Dobson’s book, Bringing Up Boys, ignited in Bobby a desire to spend more quality time with his boys. They expressed interest in hunting, so Bobby ran with that and for years the time spent with his sons has forged an unbreakable bond. It also unveiled Bobby’s passion for young men that don’t have the godly father example and mentors like he did growing up.

“We began to support a boy’s ranch in Alabama and then shifted the money we give beyond the church to Fathers in the Field last year when the ranch changed its outreach focus,” said Bobby. “I believe Fathers in the Field has the potential to make the most impact in the United States because of where we are now. Families are coming apart, fathers aren’t being leaders and boys don’t have anyone around to show them how to be a man. The impact of the ministry can multiple over generations when we help can break the cycle of abandonment with God’s love and forgiveness whether it’s with our time or money.”

Bobby’s tireless enthusiasm for the ministry was fueled by spending time with John, Kevin, the Fathers in the Field board of directors, and other donors at a duck hunting lodge in South Texas a few months ago. “I was impressed with the caliber of men. I thought, ‘these are guys putting their money where their mouth is,’” said Bobby. “I was humbled realizing these men were all very successful by the world’s standards but they knew their common interest in defending the cause of the fatherless was the most important thing they could do or achieve.”

Bobby is expectantly waiting on getting his own Field Buddy one day, so “I can keep up my excuse to leave the house and hunt,” said Bobby with a grin. “Actually, I would say being part of this ministry, whether it’s being a donor or Mentor Father, are roles that can make the most difference in God’s world for the future. This is not a short-term fix with instant results, but it’s got to be done.”

As Bobby waits for a Field Buddy, his goal is to keep trying to help get the ministry into as many churches as he can. He’s connecting with people in his area to help grow the ministry and recently returned from speaking and introducing Fathers in the Field at a banquet gathering of 100 people from five churches in North Carolina.

“I have the resources to help,” said Bobby. “Now when I’m asked, ‘What are you doing with your passion? I point to Fathers in the Field.”

If what we are doing touches your heart, please consider partnering with us. We are in need of Mentor Fathers in your local area, Church Champions to implement the program in their churches, and individuals and companies who would come along side us with tax-deductable contributions to support the fast-growing needs of the ministry.

There are millions of boys right here in our own country who are crying out for a father figure in their life! To to discuss how you can join us in this exciting mission, please connect to our website below, email info@fathersinthefield.com or call our headquarters at 307-332-0901.