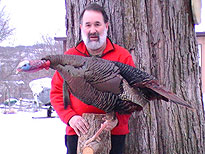 This story begins in a small town in the Central Finger Lakes Region of New York, commonly called Wine Country. It is a little piece of heaven to me, abounding with hunting and fishing of all types. The hunt for the wild turkey is my favorite. What a privilege it is to share how God used my love of hunting wild turkey to touch the heart of a lost young man and secure his eternal future.

One day, as I was shopping at the local grocery store, I overheard the stock boy, “Sam,” talking to a customer about turkey hunting and how he would like to learn. Unfortunately, Sam’s dad wasn’t a hunter, so he had no one to teach him. My ears perked up and something started to stir deep within my heart. I wondered if God might allow me to come alongside this young man and share my love of hunting with him. I didn’t know Sam, but the need was obvious and the time was right. My daughters were away at college, my oldest son had moved to Ohio, and my youngest wasn’t old enough yet to hunt. After praying about it for several weeks, the Lord made it clear to me that I was to mentor this young man. So, I returned to the store, found Sam, and asked him if he had found anyone to take him hunting. Dejected, he said “no” and started to walk away. You can imagine the look on his face when I said that if he was really serious about it, I would be glad to be his hunting mentor. Sam was 19 at the time. But because he still lived at home, I wanted to make sure that we honored his parents and got their approval. With their blessing, we were off and running.

We scouted for several days before the season opened and found several old turkeys to pursue. That first bird we set our sights on gave us a run for our money. We tried for days to get him… with no success. Sam was starting to get impatient and fidgety. It actually was kind of funny to watch, bringing back memories of the first hunt I shared with my son. Sam wondered if it was time to give up on that old bird and go after another one, but I felt confident that this was the one he would get. I explained to him, “This is the Lord’s bird and He will give it to us when He is ready. These things happen for a reason and the Lord just might be trying to teach you patience.”

It took three more days to figure out that old bird. I viewed the experience as a great opportunity to teach Sam a little about the life of following God. The bird had a particular section of woods that was only two acres and was so clear you could see all the way through it. I explained to Sam the only way to get him was to play the game his way. Sam wasn’t sure about that and wanted to pursue another bird. I explained to him that this bird wanted us to play by his rules much like the Lord wants us to obey his rules for living our lives for him. Sam just looked at me and made no comment. We ended the day with him pondering my response.

I picked up Sam the next morning and we played the turkey’s game. We went to the 2-acre woods and found a place to set up. We waited and waited… no turkey coming or gobbling. By mid-morning I decided to use a gobble call from another patch of woods about 600 yards away. It worked! That old bird started gobbling and coming our way. As Sam got him in view, I never saw anyone so nervous. My 10-gauge was bouncing so hard in his arms that it looked like a rubber ball. It felt like an eternity as we both waited for the bird to get close enough for Sam to get a clean kill.

The bird came strutting into the woods and hung up at 70 yards. He stood there for long time. I let out some faint purrs. He finally broke and came within about 50 yards of us, stopping behind a tree. I whispered to Sam, “When he sticks his head out from behind the tree, you can take him.” He said, “Are you sure I can do it?” I reassured him and said, “Just make sure your head is down on the gun and squeeze the trigger, don’t jerk it.” It was about ten minutes and the turkey stuck his head out. Sam squeezed the trigger and in that moment, fulfilled a dream.

I never saw a boy run so fast in my life. Sam jumped up and down with joy, tears running down his face. I asked him why he was crying. He responded, “It is so beautiful!”

When things settled down, I prayed and thanked the Lord for his blessing. Sam asked me why I prayed and gave thanks. I reminded him that this old bird belonged to the Lord and was gift from Him. Then, I shared more with Sam about the Lord and His guidebook for our survival, the Bible.

Sam didn’t say anything. But a few weeks later I learned from his sister that he had begun attending church with the family. When his dad asked him why he started going to church with them, Sam said it had to do with something he learned while he was hunting with me. Not long after that, Sam gave his life to the Christ during an altar call. I was overjoyed, and grateful to the Lord for allowing our paths to cross. I had no idea how timely our meeting would prove to be.

In October, Sam and a friend stopped by to borrow my duck decoys for the weekend. Of course, I was glad to lend them the decoys and even happier to see Sam pursuing his passion of hunting. It is my last memory of Sam. Returning home from their hunt, he and his friend were in a head-on crash and Sam was killed. I felt like I had lost a son.

I had my own children and Sam had a dad. But the Lord knew that we needed each other and blessed us with a friendship, as brief as it was, that had an eternal impact on both of us. After Sam’s death, I mounted that old turkey and took it to his parents. They gave it back to me with gratitude for sharing my love of hunting and my love of the Lord with him. I felt honored and blessed. I am confident that Sam and I will meet again… when the Lord calls me home.

God bless all of you who will take this journey and stand in the gap for young men who need mentors to share not only their passion for hunting, but more importantly their love for the Lord. There are countless young men like Sam out there. We need to reach them before it’s too late.