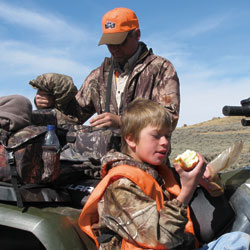 Masen’s father abandoned him for a life of crime that ultimately led to prison. Growing up having never met his dad, Masen carried a wound of abandonment that was not visible on the outside but gnawed at him on the inside—producing anger and resentment and convincing him that he was not worthy of a father’s love.

In 2006, 9-year-old Masen was enrolled in Fathers in the Field by his grandmother. The boy was teamed up with his Mentor Father, Scott MacNaughton, who knew first hand the heart-wrenching pain caused by father abandonment. Scott’s own dad left him and his family when Scott was in his late teens. “I’m thankful that my dad was in my home growing up,” Scott says. “But ultimately, he still abandoned me. And it doesn’t matter at what age that happens. That always leaves a wound that requires healing and forgiveness.”

As a young adult, Scott was able to forgive his dad and experience a kind of freedom that he had not known before. “Through forgiveness of your dad, you can find freedom from malice, bitterness, and anger,” Scott says. “What a relief it is when all of that junk is replaced with mercy.”

Scott desperately wanted that same kind of relief for Masen. About six months into his first year with the boy, Scott asked Masen if he could forgive his dad for abandoning him. Masen emphatically and angrily responded, “NEVER, NEVER, EVER!”

Over the next couple of months, as Masen and Scott spent more time exploring God’s creation and the forgiveness that He offers through His Son, Jesus Christ, the boy’s heart began to soften. Then one Sunday morning, “NEVER, NEVER, EVER” arrived.

Masen told Scott that he had prayed for forgiveness from his Heavenly Father and for salvation through Jesus Christ. He went on to say that he had forgiven his dad, too.

To say the least, Scott was blown away! But the story doesn’t end there. Two weeks later, Masen got a surprise letter from his father in prison. His dad wanted to see him. Just months earlier, such news would have infuriated this hurting boy. But now, with his wound of abandonment beginning to heal, Masen welcomed the opportunity to visit his dad, tell him he forgave him, and share with him the freedom that he had found in Jesus Christ.

Today, Masen still does not have a relationship with his dad. Further, he has yet to hear his dad say, “I’m sorry, son.” Scott understands the pain of that. He, too, is still waiting for an apology from his dad. “The reality is a lot of these boys will never hear their dad apologize for leaving them. But forgiveness can’t be based on that,” Scott reminds Masen and the other boys (and men) he ministers to through Fathers in the Field. “We have to keep looking back to Jesus for His healing forgiveness. We have to say, ‘I am ready and willing to forgive and that forgiveness can only come from Jesus’ forgiveness of me.’”

What is most important is that Masen knows he has a Father in Heaven who loves him and will never leave or forsake him. Through his faith, his relationship with Scott, and the journey they are on together with Fathers in the Field, Masen is growing into the young man he never imagined he could be.