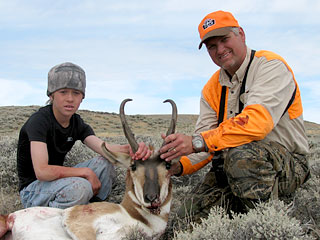 Eleven-year-old Masen had never met his father who left him for a life of crime that ultimately led to prison. The wound of abandonment that Masen carried was not visible on the outside, but it gnawed at him on the inside, producing anger and resentment and convincing him that he was not worthy of a father’s love.

In 2006, Masen, then nine years old, was enrolled in Fathers in the Field through a local church. Masen’s grandmother noticed the Fathers in the Field enrollment ad in the newspaper and she called telling us that he needed help and asking if we would call his mother to get Masen enrolled. We did, and before too long, Masen and his Mentor Father, Scott, were planning for their year-end turkey hunt.

Masen was introduced to the concept of forgiving his father in the sixth month of the 10-month Journey Curriculum. He emphatically and angrily wrote in big, hate-filled letters, that he would “NEVER, EVER FORGIVE” his dad.

Over the next couple of months while sharing time together and exploring God’s creation, Masen asked his Mentor Father many questions about this idea of forgiveness. Questions like, “Would you forgive your father if he abandoned you?” “Did Jesus really die for me on the cross?” “How could God let His Son die on the cross?” “Do I really need to be forgiven?” “Am I a sinner?” Many wonderful conversations unfolded between Masen and Scott within natural and normal settings-like driving to Sunday school and eating lunch under a tree while looking for elk in the Wind River Mountains.

One Sunday morning, when Scott picked him up to take him to Sunday school, Masen boldly and confidently proclaimed that the night before he had prayed to his Heavenly Father to forgive him and that he had accepted Jesus as his Savior. Masen added, “And, by the way, I forgave my earthly dad too. And, I want to be baptized!” To say the least, Scott was blown away and filled with incredible joy. This was the moment that all Mentor Fathers hope and pray for!

One month later, Masen was baptized in the presence of his church family, his Mother, Grandmother, Grandfather, Great-Grandparents, and of course, his Mentor Father, Scott. What a celebration! Praise the Lord!

However, God’s special redemptive plan was not over. Within two weeks of his receiving Christ as his Savior, Masen received the unthinkable-a letter from his father in prison who wanted to see him. (God’s plan is perfect…. That letter would have been torn apart before God softened Masen’s heart.)

Masen asked his Mentor Father, “What would you do?” Scott responded, “What do you think you should do?” Masen thought about it for a little while and said, “I should go see him and tell him that I forgive him. And, tell him, that I have been forgiven too. I should tell him about Jesus and maybe we can spend forever in Heaven together.”

What a powerful testimony of God’s mercy and love for His children. Masen’s wound of abandonment can finally heal, no longer festering in his heart. He has broken the bonds of anger and hatred, and through God’s grace, the cycle of destruction in his life has ended. He is now whole in Christ.

Today, Masen still does not have a relationship with his dad. But, he knows he has a Father in Heaven who loves him and will never leave or forsake him. Through his faith, his relationship with his Mentor Father and his Church family, and the journey they are on together with Fathers in the Field, Masen is growing into the young man he never imagined he could be.