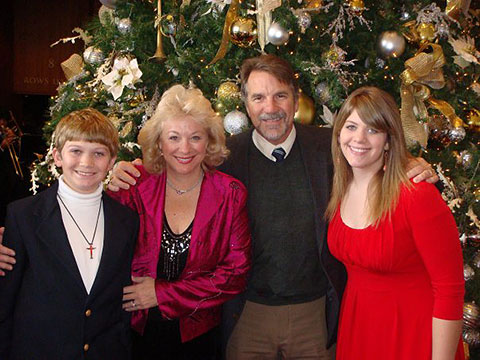 It was a crisp, sunny morning in February and the sky over Florida was cloudless and bright—filled with the expectations of a little boy eager to welcome his dad home. Seven-year-old Matthew gazed into the wild blue yonder, imagining the incredible tales from space that his dad, Space Shuttle Columbia Commander Rick Husband, would share with him as he tucked his little boy into bed that night. What Matthew did not know as he peered hopefully into the heavens was that his dad was already in heaven.

Matthew’s mom, Evelyn, recalls that horrific moment when she had to look her little boy in the eyes and tell him that something had gone terribly wrong. Daddy was probably not coming home. She remembers Matthew’s quiet response, “I guess I won’t be in Indian Guides anymore.” At that moment, the wound of abandonment that has the potential to poison and even destroy a boy’s entire life ripped open Matthew’s heart.

This story is a little different than the others we have shared with you through Fathers in the Field. Matthew’s dad did not intentionally leave him. Rick Husband was a good dad who loved his children very much and intended to walk beside them for a lifetime. But his life was cut short on that tragic day in 2003 when the Space Shuttle Columbia broke apart over Texas just moments before the expected landing. Among those left standing brokenhearted on the empty tarmac were Evelyn, daughter Laura, and young Matthew with a dad-size hole in his heart.

Family and friends rallied around the Husbands, offering support and love. But something was missing for Matthew. Evelyn soon discovered a hard truth: Matthew desperately needed a man in his life. She saw his loneliness, his frustration, his struggle to understand himself as a boy and to challenge himself toward becoming a man. And she found that, as a woman, there was only so much she could do.

“As Matthew began to play sports and continued to mature, I was very aware that he needed his father,” Evelyn says. “I could model femininity for Laura. I could show her what a godly woman looks like. But Matthew and I view life completely differently. I don’t have the skill set to see through Matthew’s male lenses.”

Statistics are clear and convincing—the absence of a father is a life-threatening condition for a boy. Fatherlessness is linked to depression, delinquency, violence, crime, gang membership, academic failure and difficulty with emotional commitments. As the number of fatherless families grows, the problems grow among boys across our nation. And there’s no doubt that our boys are in trouble. Too many are underachieving in school, adrift and disconnected from their communities, overweight and overmedicated. “What our boys need isn’t simply more education, more medications, more money or more activities,” writes Meg Meeker, M.D., a bestselling secular author, in her book, Boys Should Be Boys. “They need fathers who will embrace their sons and watch them with the eyes of schooled hawks.”
The truth of the matter is that whether a father dies a national hero or simply walks out on his family for selfish reasons, the result is abandonment. A boy possesses a uniquely masculine spirit, and his father’s absence creates a deep soul wound for his abandoned son. A boy desperately needs his dad to help nurture his masculine spirit. Without it, he’s adrift.

Thankfully, Evelyn Husband was able to bring good and godly men into Matthew’s life to walk alongside him in the years following his dad’s death. Then in 2008, Evelyn married Bill Thompson—the man who not only would become the spiritual leader of their home, but also a mentor father to Matthew. “Soon after I met Evelyn, I fell in love with Matthew, too,” he said. “And I realized: this might be the biggest challenge I would ever face in my life, trying to be a father figure to a young man who has lost his dad.”

Matthew initially resisted Bill’s involvement. “You’re not my dad,” he told Bill. “You’re right, I can’t replace your Dad,” Bill responded. “But I can be a father-like figure to you. I can be your wing man.” The “wing man” is the guy who keeps a pilot out of trouble, Bill explained, who’s there to back him up if needed. Bill became that person for Matthew. They went on outings together. They watched guy movies: Band of Brothers, Crimson Tide, Braveheart, The Last of the Mohicans. Matthew began taking on challenges he might have avoided a few year ago, like playing football. When his confidence initially faltered, Bill encouraged him to face his fears and get back on the field.

Today, Evelyn sees a world of difference in her son. Matthew carries himself with confidence. His legs are muscular from long hours on the football practice field. He tackles his homework with more determination and focus. “I’m so grateful for Bill,” Evelyn says. “There are so many things that Matthew is not comfortable talking to me about, but he can share with Bill. Bill has that frame of reference.”

The final convincing word comes from Matthew himself in a paper he wrote for school. Reflecting on a concept he had heard in church, Matthew, wise beyond his 14 years, wrote:

The traditional family is the best setting for children because it was designed by God. Based on personal experience, it is better to be raised by both parents.

There are, no doubt, countless boys in your community who are being raised in single-parent homes by their moms. As Matthew’s story tells us, those moms can be responsible, dedicated, and loving but still unable to meet their boys’ needs. Fathers in the Field exists to help raise up godly men who are willing to serve as mentor fathers to walk alongside fatherless boys, help them heal the wound of abandonment and ultimately enable them to realize they have a Father in Heaven who loves them and will never leave or forsake them.