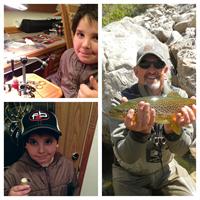 He is before all things, and in Him all things hold together. Colossians 1:17

“What sells Fathers in the Field to other men is telling them stories about your experiences. I had the wrong idea on how to build the ministry. I didn’t realize how quickly it impacts the church.”

When you take on life with the belief and acknowledgement that God uses everything for our sanctification and redemption, the sovereignty of God becomes not a force to be reckoned with but a force to kneel before in surrender and praise.

“I’m glad He’s in charge,” said Mark Johnson, Church Champion at Neighborhood Alliance Church in Riverton, WY and the mentor father to 11-year-old Joseph. With God at the helm of a purpose-driven life, fear dissipates and the adventure begins.

Along with Assistant Pastor Mike McNeill, Mentor Father Kevin Tippets, Jacob Parker, Ryan Stewart, Lead Pastor Kurt Niemeyer and other church team members, Mark’s taking the church’s mission to “glorify God in attitude and action through an outward focus” out of the seats and into the streets. “I am surrounded by a team led by pastors that are all inspired by God’s love for them,” said Mark.

Fathers in the Field took root in Mark’s heart in May 2012 when Scott MacNaughton spoke at his church. “I was moved by it and the role of the church champion. I knew I would be all over it and my wife, Patti, agreed,” said Mark, who later experienced the heart of Fathers in the Field watching a mentor father interact with his field buddy as the boy landed his first rainbow trout on a fly fishing excursion.

Mark wasn’t fully prepared for all the painful and colossal needs Fathers in the Field would expose in his community in the months to come. Looking back, Mark realized he spent too much time trying to build awareness using the Fathers in the Field videos, materials and talking to the church body when he should have just engaged men one-on-one and personally invited them to get involved.

In spite of Mark’s learning curve, God blessed his efforts with an unexpected surprise. He used a ministry to fatherless boys as a springboard to create an outreach to single moms.

Mark got a first-hand look inside the plight of Riverton’s single moms, making up almost half of the people in his community of 10,000. He encountered single moms in Fathers in the Field recruitment meetings, at his church and in a restaurant where a single mom shared about the father of her children going off the deep end.

God showed his sovereign hand using Fathers in the Field as the catalyst to start the Single Mom’s Ministry in the church. “It was from our involvement in Fathers in the Field that we realized just how big the issue is in our community,” said Mark. “But our church builds teams not personalities. Since the ministries we commit to extend beyond a person, team building for a single mom outreach commenced.”

The Single Mom’s Ministry kicks-off with an event on Sunday, March 24. God turned Mark’s involvement with Fathers in the Field on its head.

“In my efforts to recruit field buddies, I met with five single moms and out of five, only one mom and her teenage son showed up,” said Mark. “It only took one to show us how deep the issues are. Two men had already abandoned the family, so the gut-wrenching plea was ‘I don’t want another fake father in my life.’”

The mom didn’t respond after that emotional first meeting so Mark’s “greatest inspiration,” Patti, called to check on her only to get resistance. The mom said she needed to postpone involvement because “things are tough.” Patti and Mark both realized how huge the need is to break down the barriers when a lifeline is offered and they don’t reach out and accept the help. They knew they needed to start a single mom outreach in their church so Mark’s wife and daughter did reconnaissance work to find out the greatest needs of a single mom.

In the meantime, Mark is enjoying his budding relationship with Joseph, a boy whose mom worked on the assembly line of Brunton Outdoors, Fathers in the Field’s Founder John Smithbaker’s former employer. More single mom service projects and an end of the year camping and fly fishing expedition are in the works. “I can’t wait to see Joseph when he hooks up on a big fish,” said Mark.

Certainly, Mark knows what it looks like to hook up to God’s bigger story. He turned one man’s “Here I am, send me,” into a team of people reaching out to thousands of single moms in the community. It’s just a matter of time before boys are identified and men answer the call.

“Men are scared to death. They are not getting in line, that’s for sure,” said Mark. “They don’t think they have their life in order to participate. They’ve been let down so they don’t want to let a boy down. But we are called to defend the cause of the fatherless and that means to fight.”

Mark’s insight into how the baggage of our past defines the boundaries we set for people and our relationship with God is profound. “The walls we build need to be torn down and moved out of God’s way. I want God to know me how he intended me to know him and not through the lens of my own experiences.”

Without the walls caging men in, there’s a new-found freedom enabling them to give their lives away. As a fisher of men, Mark knows personally how God’s perfect love casts out fear.