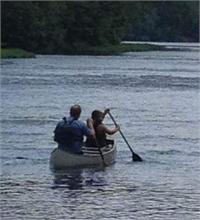 Since ancient times no one has heard, no ear has perceived, no eye has seen any God besides you, who acts on behalf of those who wait for Him. Isaiah 64:4 (NIV)

The waiting was the hard part.

When Virginia native John Cunningham met his Field Buddy, Aden, it had been two years since he heeded the call to defend the cause of the fatherless. The call came in 2010 from Church Champion Terry Leach, when he implored the men of New Hope Bible Church in Front Royal, VA to step up and be a Mentor Father.

“Terry was compelling from the pulpit as he told about the mission and purpose of Fathers in the Field,” said John. “The problem was there were no boys to mentor.”

Eager to invest in the lives of fatherless boys, the waiting period of the New Hope Fathers in the Field team was Galatians 6:9 on display: “Let us not become weary in doing good, for at the proper time we will reap a harvest if we do not give up.”

Although unlike the waiting period Abraham, Joseph or Job had to endure with so much to lose; John’s unfulfilled call was a test in remaining faithful to the task God called him to – mentorship.

Abraham waited decades on God to fulfill his promise to him and Sarah, Joseph patiently sat in a prison cell blind to God’s next move and Job endured an endless barrage of trials and torment not knowing God was going to restore everything. What are you waiting for? Was is your heart longing for? Do you trust God’s timing? Are His promises enough?

“I grew up in a Christian home and had a great relationship with my mom and dad, but so many of my friends came from a broken, fatherless home,” said John. “The friends who had a male mentor, whether it was through scouting or by someone who was there to show them how to be a man, did better than my friends without a father-like mentor. They didn’t learn how to be a man.”

Three months ago, the promise of a Field Buddy was delivered when John and Aden met for the first time. Their inaugural canoe trip after church was a hit and since then they’ve enjoyed Fathers in the Field Journey Guide studies and geocaching, a navigational adventure game where you use a GPS to put in your location and hide and seek containers with different trinkets inside.

“Aden is a great fit for me. He’s a reserved and quiet boy and I was, too. Where our life track significantly departs is how we grew up,” said John. “If I can take the knowledge and leadership I have and pass it along to a boy like Aden who desperately needs those experience to take him through life, it’s my responsibility to take care of it.”

Meeting his wife of four years, Katharine, was momentous in John’s faith journey. “Even though I was a Sunday church goer all my life, what it means to be a follower of Christ didn’t take hold of me until I meet my godly wife,” said John. “She was the one who was courageous enough to say, ‘You call yourself a Christian, but you don’t live it.’ I was convicted to make it personal and real and not just a weekly habit.”

John lives out his faith through his involvement with Fathers in the Field by doing the seemingly mundane, yet sacrificial things to be with his nine-year-old Field Buddy like working the transportation logistics between Aden’s mom and grandfather since Front Royal is a one and a half hour drive to Aden’s town of Sterling.

John knows he needs to be intentional and even has a strategy to build Aden’s trust. John knows so many men have come and gone in the boy’s life, he knows he must show him he’ll be around and can depend on seeing him on a consistent basis.

“I’m ready to get on some hikes and trails and show him the world. Aden lives in the city and Katharine and I live on a dirt road in the boonies with the Shenandoah River meandering through our front yard,” said John, who is a self-described “huge outside guy” naming hunting, hiking, backpacking, and off-roading a few of his favorite things. “Aden and I come from different worlds. He could teach me 1,000 things about walking down a sidewalk, but I can teach him 1,000 things about walking down a side of a mountain.”

John’s still in the “earning my trust” stage and looks forward to the time when he’s earned the right to hold Aden accountable in his life and in his faith. “We need to get to the place where he’ll allow me to hold him accountable,” said John. “I’m convinced we’ll get there, it will just take a little time.”

As John has proven before, he can wait.

And so, having patiently waited, he obtained the promise. Hebrews 6:15 (New American Standard)