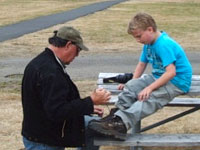 I planted the seed. Apollos watered it, but God made it grow. So neither the one who plants nor the one who waters is anything, but only God, who makes things grow. The man who plants and the man who waters have one purpose, and each will be rewarded according to his own labor. For we are God’s fellow worker; you are God’s field… I Corinthians 3:6-9

The harbor town of Warrenton, Oregon sits at the perfect pitch to witness the end of the Columbia River’s 1,200-mile journey to the Pacific Ocean. Only the road heading southeast toward Portland some 75 miles away leads away from water. It’s here Mentor Father Larry Sprouse, his wife, Jean, and son, Jon, make their home.

As manager of the Oregon Department of Forestry’s reforestation program, Larry is dedicated to replanting what was lost to cutting or fire. This act of restoration and renewal manifests itself over time with constant care and hard work. His vocation is a beautiful analogy of his budding relationship with 10-year-old Field Buddy, Richard.

“Past hurt and life experiences have made Richard guarded and non-communicative,” said Larry. “Building trust is a process taking time and patience. The Fathers in the Field ministry’s intentional outreach approach combined with their three pillars of Faith, Fatherhood and Forgiveness address these needs. By being accountable, reliable and non-threatening, Richard now realizes I’m a safe place to be.”

Larry’s relationship with Richard began in spring of 2011 when he heeded Church Champion Bill Roady’s call for men of Lighthouse Christian Church to step forward to help defend the cause of fatherless boys. “Because I have great respect and admiration for Bill, I decided to step in because he asked,” Larry explained. “Jon was about to graduate high school, so it was the right time to refocus my energy on a boy who needed the same outdoor experiences and attention I gave my own son. My relationship with Jon and active involvement in his life including his passion for music, have played a significant role in my willingness to take on the role of a Mentor Father.”

It also was an opportunity for Larry to get to know the other Mentor Fathers and Deuteronomy Dads at Lighthouse Christian Church better. As the four men spent time together with their Field Buddies and sons, Larry quickly realized his role as a Mentor Father was entirely different than his earlier role as a Cub Master.

“Since Fathers in the Field is spiritually based, we’re more transparent with each other,” said Larry. “As Mentor Fathers, we’re mentoring boys from broken families, many with developmental challenges and troubled childhoods. And, as in Richard’s case, surrounded by girls.”

Raised by his grandmother, Larry is one of the few male influences in the third-grader’s life outside the school system. When Richard began acting out at school, Larry intentionally reached out. With no agenda or judgment, Larry invested time to actively listen to Richard and encourage him over a burger. “Richard relaxed, opened up and began talking about his Russell Terrier, Jack. Six or seven months ago, he hardly said a word,” said Larry.

Planning regular time to work and play together is a key to his earning the right to be heard. With the other Mentor Fathers and Deuteronomy Dads, Larry and Richard help a widow in their church each month by collecting firewood, doing light maintenance and working around the house. In addition to community service, they also schedule time for fun – from laser tag and bowling to their many outdoor adventures, like overnight camping and a recent crabbing trip. The time spent together helps build strong relationships vital to setting the stage for the Fathers in the Field monthly Journey Talks about faith and forgiveness.

Larry’s own faith journey took time; taking root with the help of his wife and church family. His father was placed in an orphanage at a young age and his fatherless experience undoubtedly influenced Larry’s life. Larry’s father provided well, but without a man modeling authentic fatherhood in his life, he didn’t know how to interact and build relationships with his children.

Without a healthy relationship with his own father, it took time for Larry to accept the love of his heavenly Father. He always believed God existed, but had never embraced what Christ had done for him on the cross. In time, it became personal. Since he put his faith and trust in Christ, triumphs, trauma and near-death experiences have strengthened his faith and resolve to invest his life in others.

“I just want to be there for Richard and the Fathers in the Field ministry provides the ideal way. He needed a man in his life willing to exemplify God’s love for him and share a life of adventure,” said Larry. “I know he’ll respond when he’s ready. Through this ministry, I’m just planting the seeds. That’s good enough for me.”

If Larry is patient enough for a majestic Oregon Hemlock Spruce or Douglas Fir to take root, he knows a consistent strategy of caring and nurturing will help the relationship with his Field Buddy continue to grow. God will see to it.

Blessed is the man who does not walk in the counsel of the wicked or stand in the way of sinners or sit in the seat of mockers. But his delight is in the law of the Lord, and on his law he meditates day and night. He is like a tree planted by streams of water, which yields it fruit in season and whose leaf does not wither. Whatever he does prospers. Psalms 1:1-3