Pure Religion: Fighting For The Fatherless

BY MEGAN FOWLER
By Faith Magazine

John Smithbaker knows firsthand the devastating effects fatherlessness has on a young boy. He also understands today’s societal blight resulting from millions of children growing up without fathers. But he burns to see churches embrace the biblical mandate to defend the cause of the fatherless; and when churches do, it electrifies the body of Christ. 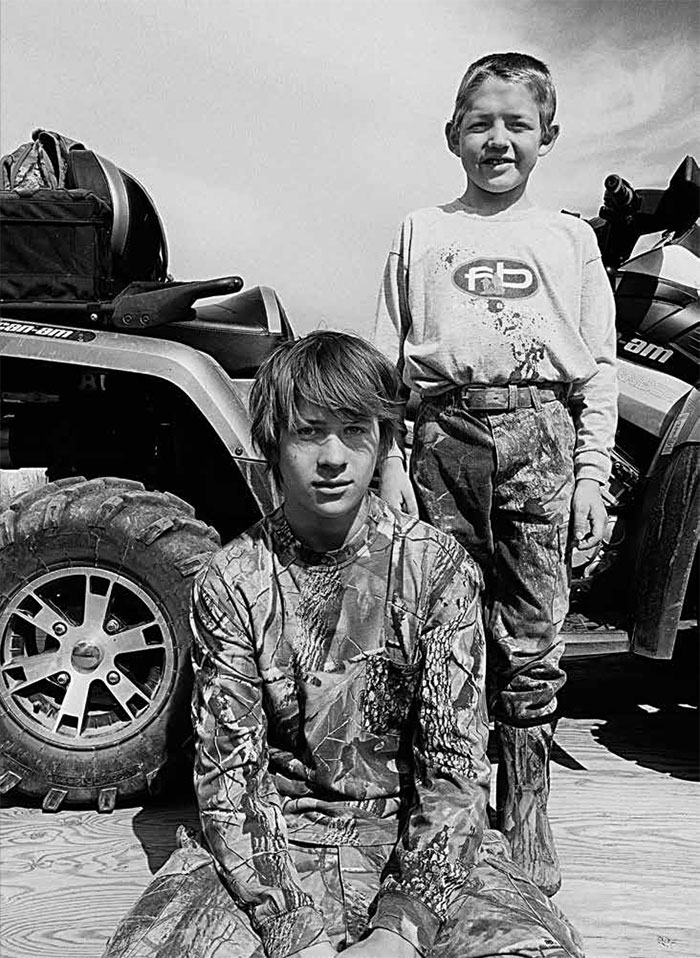 Smithbaker burns to see churches embrace the biblical mandate to defend the cause of the fatherless; and when churches do, it electrifies the body of Christ

In 2007 Smithbaker and his pastor, Scott MacNaughton, founded Fathers in the Field (FITF), a church-based program that pairs men in the church with fatherless boys to teach the boys outdoor skills, introduce them to the love of their Heavenly Father, and help them learn to forgive their earthly fathers.

Smithbaker’s father left his family while his mother was pregnant with him. His father even encouraged his mother to abort him. Smithbaker said the wound of his father’s rejection gnawed at him for years and drove him to perfectionism as a way to earn the love of a father who had wished him dead. In his quest for success, he swore he would never forgive his father.

Ten years ago Smithbaker stopped his car on the side of the road and surrendered his life to Christ. As he knelt and confessed his need for a savior, Smithbaker said he felt God telling him, “John, now you need to forgive your earthly father.”

“I wrote my dad a letter telling him what he did was wrong but that I forgave him because God had forgiven me. One year later God put Fathers in the Field on my heart,” he said.

Smithbaker and MacNaughton began the pilot program for FITF in 2005 and rolled out the full program in 2007. The FITF curriculum is comprehensive. Pairs of mentor fathers and boys (called “field buddies”) commit to participate for three years. Field buddies attend church twice each month with their mentor fathers and help widows in the community through monthly service projects.

Mentors and field buddies also work toward a year-end adventure, meeting monthly to practice for the “Adventure Passage” and discuss the themes in the Life-Journey curriculum. The Life-Journey study specifically addresses the wounds of father abandonment.

Based in Lander, Wyo., FITF welcomes sportsmanship and adventure. The program encourages mentors to share their passions with their field buddies, especially interests that get the boys into God’s creation. MacNaughton, who pastors Covenant Presbyterian Church in Lander, believes the outdoor element of the ministry kindles the excitement of the men and the boys.

“Boys are naturally adventurous, and they need to get outside and be introduced to God’s creation. God is ministering to boys through the outdoors,” he said. 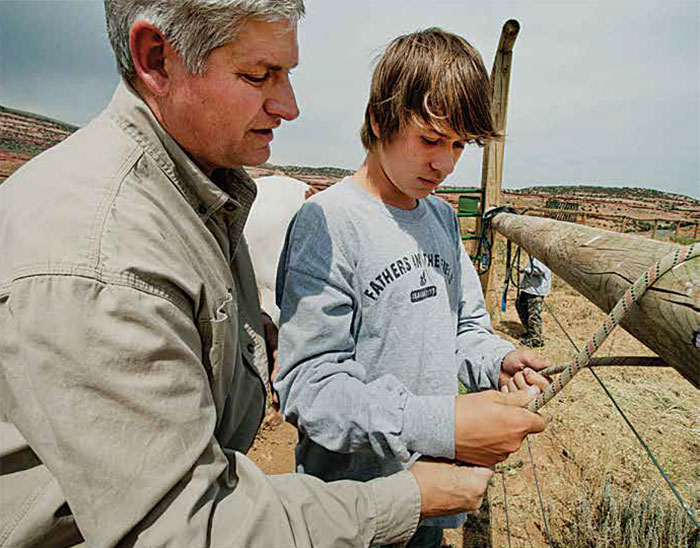 “Boys are naturally adventurous, and they need to get outside and be introduced to God’s creation. God is ministering to boys through the outdoors.” — Scott MacNaughton

And when men in the church are encouraged to use their interests to help others, MacNaughton believes those men are ignited to faithful, enthusiastic service. “My passion is to set men free into their passion, to serve God with it,” he said. “[Men can] use that passion to pass on a legacy to a child.”

Once the mentor fathers have secured the field buddies’ trust, they begin to share with them about forgiveness — how God has forgiven them and how they need to forgive the fathers who abandoned them.

Making a Man of Masen

Emilee King, Masen’s mother, was one of 12 women who responded to the ad Smithbaker and MacNaughton placed in the paper asking for fatherless boys to be mentored in the pilot program.

Masen had met his biological father once years ago when Masen visited him in prison.

“[My father] told me after he was done there that he would be turning his life around and would like me to come stay with him. I haven’t seen him since. He never once was part of my life and has never supported my mother,” Masen said.

King had used other mentor programs in the past but with little success, and she was concerned about Masen’s growing anger about his father. That was when she saw the ad in the paper.

At age 9 Masen became MacNaughton’s first field buddy. MacNaughton taught him how to hunt and introduced him to the love of his Heavenly Father. Masen said he and MacNaughton have talked about everything two people could possibly discuss.

Since then Masen, now 15, has forgiven his biological father and professed faith in Christ. When MacNaughton baptized him, four generations of Masen’s family — none of them regular church attendees — came to the baptism.

King is astounded at the gracious young man her son has become, and she credits FITF with helping him relinquish his long-held anger.

“Scott and [FITF ] have taught Masen to forgive and what it means to truly forgive someone. He is different now because he doesn’t carry that anger with him everywhere he goes.”

“The Tsunami is Coming”

Smithbaker believes defending the cause of the fatherless is a Christian duty and the answer to a national crisis. In the U.S. today more than 40 percent of children — over 25 million — grow up in fatherless homes.

The reasons for the fatherlessness matter little; its effects are the same. Children from fatherless homes commit the majority of murders and make up more than half of the state-prison population. They are more likely to abuse drugs, drop out of school, exhibit violent behavior, and commit suicide.

And as these children become adults, the wounds only fester. “Wounded people wound others,” Smithbaker said. “The tsunami is coming.”

MacNaughton freely quotes passages from the Old Testament and New Testament — including Isaiah 1:17, the FITF theme verse — to demonstrate how the pages of Scripture overflow with calls to defend the fatherless. “The heartbeat of God is for the defenseless and the weak,” MacNaughton said.

But FITF aims higher than giving fatherless boys a productive hobby or keeping them out of trouble. Smithbaker is hunting for hearts.

“Boys are being helped,” he said. “It’s not our job to make them good citizens but to share with them the gospel in a way a fatherless boy can understand and to show him a path out of hell.” 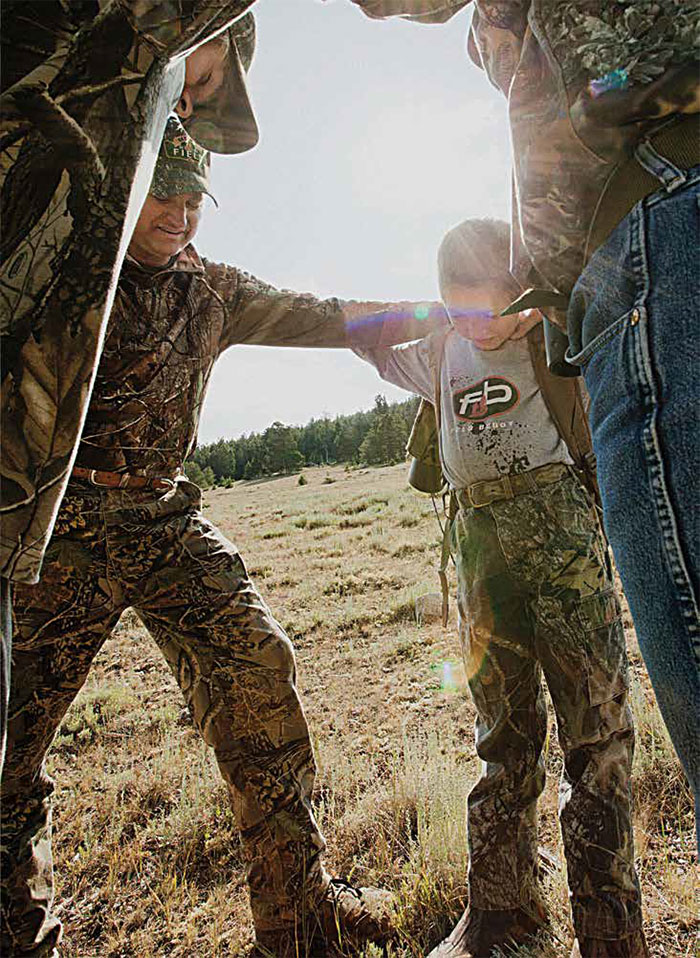 That goal of forgiveness makes FITF different from other mentoring programs. In June 2012, FITF won WORLD Magazine’s Hope Award for the West Region. Still, fatherless boys are not the only ones changed through the experience. MacNaughton said that when a local church partners with FITF, the experience transforms the church.

Through FITF, deacons have their biblical roles returned to them: caring for widows and the fatherless. “It makes a huge difference in the church,” MacNaughton said. When FITF began, Covenant’s deacons realized just how many widows attended the church. Now the deacons have a vibrant ministry of finding and meeting these members’ needs.

Widows in turn become a front-and-center ministry as churches begin to actively pursue them and find ways to meet their needs. Field buddies and mentor fathers spend time each month serving them in practical ways, such as shoveling snow, weeding flowerbeds, or chopping firewood.

Women in the church also dive into the ministry, often caring for daughters in the home or bringing a meal to a single mother — anything to make the women in the home feel special. This is not an official component of FITF but seems to be a natural outgrowth of women’s compassionate natures.

And the church’s men find a way to use their interests and energy to dramatically impact the kingdom.

“It’s not just about a man and boy in the field,” MacNaughton said. “This is the whole body of Christ modeling the love of the heavenly Father to a broken family.

FITF puts safeguards in place to ensure all participants’ safety. The ministry must go through a local church, and mentor fathers must be approved by the church leadership and submit a written testimony and letters of recommendation. They must also pass local and national background checks. Mentor fathers and field buddies always do group activities with other pairs, too.

Today more than 200 churches across the country participate in the program or are preparing to participate. Most churches have a handful of mentor father and field buddy pairs, but that is sufficient. “Every soul is worthy of the effort,” Smithbaker said.

King can attest to the incredible impact Covenant and FITF have made in Masen’s life, and she encourages other churches to take steps to have the same impact on boys on their communities.

“I am not sure [Masen] would be where he is without Scott, John, and their team and the program. The best part for me is knowing that Masen has made a lifelong friend at such a young age that he looks up to, loves, and will forever be grateful for.”

Masen likewise has words of encouragement for partner churches and future mentor fathers.

“If the opportunity were to come by for me to talk to a church about FITF, the only advice I could give is to definitely try [FITF]. They have no idea of the impact on a boy’s life and that being a mentor father can just about save somebody’s life.”