Ryan’s Story From The Field 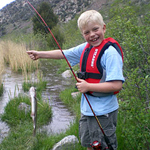 The setting could not be more picturesque: it’s a cool, rainy summer afternoon on the Madison River in Montana. A little boy with a mop of blond hair on his head and mischievous twinkle in his eye is struggling mightily to reel in his first fish. The man standing next to him—a man who he looks up to and loves—couldn’t be more proud. “I threw the line in for Jacob and gave it to him and ‘boom,’ that rainbow trout struck,” said Ryan as he described the unforgettable moment. “Jacob was so surprised and excited! We reeled it in together and had such fun celebrating right there on the shore with our ‘catch of the day.’ It was truly a fatherly moment.”

A “fatherly moment” that neither Ryan nor young Jacob could have imagined. After all, Jacob’s dad is in prison serving 25 years to life. The 7-year-old has never known his father or experienced the bonding that happens between a boy and his dad. And while Ryan had a father who loved and wanted him, he rejected his dad for a life of drugs, gangs, and crime. As a teenager, Ryan was living on the streets and selling pot to survive. “Without my dad in my life, I spun out of control and I became the person I thought I wanted to be—a criminal and gangster. But come to find out, that’s not what God intended for me to be.”

Ryan recalls how, with a drug conviction and prison sentence ahead of him and a pregnant wife whom he was about to leave behind him, God cast him a line. “I had reached my bottom and one day while I was driving home from work, I remembered what my dad had taught me about Jesus—how He would answer me if I called to Him and trusted Him with my life. So I cried out to Him and since that day I have been sober.” Miraculously, Ryan’s prison sentence was lifted and he was given the opportunity to be a father—not only to his own children, but to a little boy who had little to no chance of ever experiencing what it is to be a beloved son.

Ryan met Jacob through Fathers in the Field, a Christian outdoor adventure ministry featured at Ryan’s church, New Hope Bible Church in Belgrade, MT. Through Fathers in the Field, Ryan could combine his passion of the outdoors with his passion to serve the Lord and he soon became Jacob’s “mentor father,” teaching him about the love of God through the adventurous exploration of God’s Word and His Great Outdoors. “I pray that God will use me to lead Jacob down a path that was better than mine or his dad’s. My hope is that he bypasses the mistakes that I made and comes to know the love of his Heavenly Father in an easier way without hitting rock bottom. I’m not his father, but I love him like a son.”

Young Jacob’s life is still not perfect. His dad is in jail and has nothing to do with him. But Ryan knows that God can use that heartbreaking reality to actually begin to heal the boy’s heart. Taking Jacob through the Fathers in the Field adventure program and the ministry’s Life-Journey curriculum, Ryan is helping teach this young boy about forgiveness and the unending love of God. “The best way to introduce him to his Heavenly Father is to show him that He is only one who will never let him down – never leave him or forsake him. The door is open for him to understand that and to see God’s love in action through the ministry of Fathers in the Field.”

About Fathers in the Field: Based in Lander, Wyoming and founded by a man who was deserted by his own father and struggled with the wound of abandonment for decades before discovering the healing of forgiveness, Fathers in the Field is a non-profit, Christian adventure ministry that partners fatherless boys with mature Christian men who are passionate about God and His Creation. In the majestic setting of the great outdoors—God’s classroom—the boys learn from their mentor fathers about the liberating love of God and the healing that comes through the forgiveness of their fathers who abandoned them. Fathers in the Field is a turnkey ministry that works through local churches, equipping outdoor enthusiasts in the pews with the tools they need to forever change the life of a fatherless boy.