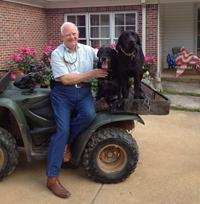 …Still other seed fell on good soil. It came up, grew and produced a crop, some multiplying thirty, some sixty, some a hundred times. Mark 4:8

When Jesus shared the story in Mark 4 about the farmer going out to plant his seed, the farmer could have been Lester Spell, Jr. DVM, who lives with his wife Clara, two Labs and a horse on his family’s farm near Jackson, MS.

Years of planting in “good ground,” Dr. Spell has reaped a harvest outlasting any seeds planted among rocks, thorns or birds circling overhead as Jesus described in the gospel story. By giving his life away, Dr. Spell’s produced a crop “some thirty, some sixty, some a hundred times what was sown” (verse 20). The allegory Jesus told from a boat to a crowd gathering around a lake’s edge is perfect to describe a man who has lived off the land and promoted its richness his entire life.

The former veterinarian and state of Mississippi’s Commissioner of Agriculture and Commerce continues to meet the growing needs of his community even after his retirement. When a man decides to invest his life, time, talent and money in growing the Kingdom of God, through giving to ministries like Fathers in the Field, his crop never ceases to grow.

“Through the years I’ve witnessed the sad and often tragic lives of young men who did not have a Christian father-figure in their lives,” said Dr. Spell. “I feel a personal responsibility to financially support this ministry because it’s meeting a real need in our local communities and making an eternal difference in the lives of many boys.”

Dr. Spell received his Doctor of Veterinary Medicine at Auburn University in 1968 and after serving two years as a Captain the U.S. Veterinary Corps, started his practice focused on small animal and equine medicine and surgery until 1995. While still operating his veterinary practice, Dr. Spell became the first mayor of his hometown, Richland, and served for five consecutive terms. He then served four terms as Commissioner and, after sixteen years, retired in January 2012 and now spends most of his time hunting, fishing and enjoying the outdoors.

In the midst of an illustrious veterinary and political career, Dr. Spell raised two children and served in various capacities at his church, First Baptist Church in Jackson where he first heard about Fathers in the Field at an annual sportsmen’s dinner in 2011. Founder John Smithbaker gave his testimony about growing up fatherless and the consequences abandonment had on his life.

“Throughout the Bible God speaks of his love and protection for the fatherless, warns against taking advantage of them and teaches us to reach out and help them,” said Dr. Spell. “Kevin Drewry (Fathers in the Field’s Southeastern missionary) is doing an outstanding job seeking and enlisting men to serve as Mentor Fathers. He’s a great representative of the ministry that helps fatherless boys experience the love of Christ and overcome an emptiness in their lives. This is a great Christ-centered organization that is helping reach and change lives and I felt compelled to support its mission.”

“’Consider carefully what you hear,” he continued. “With the measure you use, it will be measured to you—and even more.’” Mark 4:24