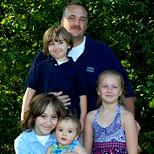 “God, why did You spare me?” That’s a question that Terry Leach looks forward to asking his Creator and Savior one day. But the answer, at least in part, may be unveiling itself to Terry right now as he reaches out to troubled, hurting boys in Virginia.

“I could so easily have been one of those boys,” says Terry, haunted by his childhood memories of the substance, physical, and emotional abuse of his parents. “I was constantly told that I was a mistake…that I never should have been born,” recalls Terry, who, from a very young age, shared his parents view on the value of his life. “Pretty much, I felt worthless,” says Terry, whose early years reflected that lack of self-worth and purpose.

At the age of 10, Terry still couldn’t read. By age 13, he had gotten a girl pregnant. “Her parents forced her to have an abortion, saying they wouldn’t be responsible for bringing the child of white trash into the world,” remembers Terry. By his mid-teens, he was living with his dad (who had split from his mom years earlier) and the teen was left to make up his own house rules. “My dad gave me a home and place to live. But he never gave me any guidance,” says Terry, recounting how he even kept a stocked bar in his bedroom. “He didn’t tell me what was right and wrong. He let me do whatever I wanted.”

Adrift in life with no vision for the future and no one to give him direction, Terry pointed himself toward self-destruction.

“I joined the Marines and headed to the front lines” says Terry. “I had a death wish. I really didn’t care about much.” Even as he came under enemy fire, this young man who carried deep, devastating wounds of neglect and abandonment didn’t care about his life. “Someone shot at me and missed. Our chaplain walked up to me and asked, ‘Where do you stand with God?’ I said, ‘I don’t know. I guess there’s a God but I don’t need religion. That’s a mess.’”

Little did Terry know that while he could have cared less whether he lived or died, his Creator cared and would ultimately rescue him from the mess of his life.

“For I know the plans I have for you,” declares the Lord, “plans prosper you and not to harm you, plans to give you a future and a hope.” Jeremiah 29:11

In the years after returning home from the Marines, Terry got married, started a family, and began a career in law enforcement. But nothing could heal that deep heart wound inflicted on him so many years before. The little boy who was told that he was a mistake and that his life had no value grew into a man who found little value in anybody else. “I was angry and mean and big so I could do whatever I wanted. Whatever makes you feel good, do it. Nobody else matters. That’s how I lived my life,” recalls Terry.

Then one night, after failing to get a prized law enforcement job in another state, Terry’s life changed. It all began with his heart…his troubled heart. “I wanted a book for the long train ride home. Wandering through the bookstore, I kept being drawn to the Christian section and honestly it made me mad. But, I finally gave in and took a look, and there on the shelf was the book I knew I had to read—For a Troubled Heart by Bill Graham,” recalls Terry, who later learned that his wife, Kristie, had been praying for him at that hour. “She was praying for me to find what I was looking for. Neither of us could have imagined I would find it that night before I got home.”

By the time Terry finished the book and got off the train he had accepted Jesus Christ as his Savior and he was a new man. On that long train ride home, his wounded heart finally began to heal and he began to understand that his life did have value—maybe not to his earthly father, but certainly to his Father in Heaven. “I got off the train and saw Kristie and she knew something had changed.” The transformation was deep and profound, not just for Terry but for his family.

“We put our trust and confidence in God, and He just started taking care of things,” remembers Terry. “I needed a better job and He provided it. We were having financial struggles and God resolved them. We needed to move to another state for my new job and needed a place to live and God led us to a house that had been reduced $50,000 that very day. We learned that our Father in Heaven is trustworthy and will provide when we seek Him.”

Among the Lord’s provision for Terry was a godly mentor—a man named Stu. “He was like a father to me, demonstrating for me what it is to be a godly man. He showed me that Christianity is not a religion. It’s a relationship with Christ. He taught me that people do matter and that serving others is better than serving self. He also taught me that a real man loves only his wife. Basically, he showed me what love really means. He was a living example of Galatians 2:20.”

I have been crucified with Christ and I no longer live, but Christ lives in me. The life I live in the body, I live by faith in the Son of God, who loved me and gave himself for me. Galatians 2:20

Together, Terry and Stu served in men’s ministry at their church, New Hope Bible Church in Front Royal, Virginia. Stu passed away in 2009, but not before lighting the fire for godly mentorship in Terry’s heart—a heart that had once ached from the wound of abandonment but now beat strongly for God and His glory. Stu’s dream—a Christian mentoring program for boys—became Terry’s pursuit. “Stu always said, ‘If we could get to the boys, our job ministering to men would be easier. Then we would have good, solid men who could serve. Instead, we are having to go back and heal all these wounds,’” remembers Terry who, after his friend’s death, started researching mentoring options and found Fathers in the Field. It was the perfect fit.

“Who else is better suited for ministering to wounded boys than one who has walked their path?” says Terry, who has taken on the role of Fathers in the Field Church Champion at his church. “God has given these children to us and we need to treat them right. We need to guide them. We need to tell them they matter. I was in my mid-30’s before a godly man did that for me. Imagine the difference we can make and the years of agony we can spare them if we step into their lives now,” says Terry.

“God, why did you spare me so many years ago?” Terry still humbly ponders that question. But the answer, at least in part, seems obvious. Someone needs to tell abandoned boys that they matter to their Father in Heaven. Who better to do it than one who shares their story of pain and can share his own incredible story of healing?