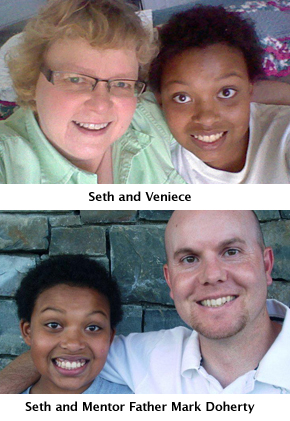 There was talk of adopting a child early in their marriage, but Veniece Lindemulder and her husband never pursued it. How they became parents of a baby boy started with a phone call from a family friend. The friend knew a young, unmarried girl pregnant with her second child and incapable of raising another one. Selflessly, the girl gave Veniece in her words, “a real blessing.”

The baby boy was born Friday, Christmas Eve 1999 in a suburb outside of Seattle, Washington. The following Monday, infant Seth was home with his new parents. His world was made right by a selfless decision by his birth mom, but a few years following his adoption his parents’ world was not right. After 10 years of marriage, Veniece’s relationship fell apart.

“I encouraged my husband on numerous occasions to see a doctor for his suspected bi-polar disorder which I believed fueled his addiction to pornography,” said Veniece. “He would swing between being loving to verbally abusive. In 2005, I moved back home to Bozeman to be close to my folks and to get Seth away from his volatile behavior.”

A restraining order was issued to keep Seth’s dad at a distance after the divorce and Veniece or Seth haven’t heard from him since.

Seth and his mom are surrounded by a loving congregation at the Manhattan Christian Reform Church and from her parents who conveniently live across the street. “My dad is 86 years old, but still comes to our home each weekday morning until Seth wakes up in the morning,” said Veniece who leaves early for her work at the Gallatin County Clerk and Recorder’s office. “My dad is a positive male influence on Seth, but can’t get around much anymore. I really needed someone to be a father figure in Seth’s life.”

Last fall, Veniece read an announcement in her church bulletin about a ministry sponsored by another local church, Springhill Presbyterian. It was about their Fathers in the Field ministry, with its once abandoned always loved message and a call out to single moms. “There’s a bit of insecurity in Seth and I felt it was important for him to know there is someone else out there besides me who loves him,” said Veneice about the motivation to make the call to Chuck Raches, Springhill’s Fathers in the Field Church Champion.

“Seth and I met Chuck and Mark Doherty at a local restaurant to discuss our potential involvement in the ministry,” said Veniece. “I had a bunch of questions and wanted to know about their roles in their church and to make sure they had Christ in their lives, since I’ve raised Seth in a Christian home. I was assured they did and their faith in Christ is exemplified in the way Mark, Seth’s Mentor Father, has accepted him, loved him and spent time with him over the last few months. It’s been such a blessing to have Mark around.”

Their prayer at the end of the meal sealed the deal. Seth’s journey with Fathers in the Field has added a new dimension to his knowledge of the Lord’s faithfulness as his Heavenly Father as he explores His Great Outdoors. In addition to the monthly Journey Talks, Seth and Mark do all the fun stuff guys like to do like rafting, fishing, bowling and miniature golf – “the things that I don’t do,” added Veniece.

Consistency is key and when Mark and Seth aren’t together, text messages keep them connected and when Seth went to summer camp a couple of weeks ago, Mark sent Seth a letter of encouragement. Seth saved the letter written by a Mentor Father who chose to be with Seth, chose to love him and adopt him into his family. It’s compelling, even to a seventh grader like Seth, because Mark’s actions reflect what God did for us.

Religion that God our Father accepts as pure and faultless is this: to look after orphans and widows in their distress and to keep oneself from being polluted by the world. James 1:27 (NIV)

“I’m tickled Mark would even do this for Seth. He’s such a wonderful guy,” said Veniece through tears. “A lot of people wouldn’t get involved, but Mark reached out, voluntarily without reservation, and committed his time and life to my son. Seth loves having being a part of Mark’s family and having a mom, dad and another sibling around. Seth’s adopted their six year old daughter as his little sister.”

From Mark’s perspective, Seth is the blessing. “Seth has such a great perspective on things and a great sense of humor. I think we are a total match,” said Mark. “We are still early in our mentorship program and I’m looking forward to getting to know Seth even more. Fathers in the Field is an incredible ministry with its program and curriculum, but most importantly, it glorifies Christ as we shine through each other. I am so happy God led me to this ministry and to Seth.”

Little did Veniece know, 12 years after she adopted Seth, Mark would adopt her son as his Field Buddy to help her lead Seth into his future role as a protector, provider and pastor of his family and into a growing relationship with Jesus Christ.