July 2, 2018 Defending the Cause: True Freedom – Leading by Example

My father abandoned me and it affected every aspect of my life.

Jesse McCulloch’s mom and dad got divorced when he was 6. By the time he was 14 his dad was just gone. No contact at all, just a void where a fathers love and leadership belonged.

“There was no man in my life leading me or teaching me about manhood. I was active in church and youth group and the year after my dad vanished I felt God calling me at a summer camp. I knew my Heavenly Father wanted to help me, but I rejected Him. I was fatherless from man and God. After I finished college the Lord called to me again and at the age of 23 I surrendered my life to God. Through His grace I knew I would never again be fatherless because my Heavenly Father had always been, and would always be, there for me.”

Jesse serves as a flight instructor for the United States Air Force and as a Mentor Father for Fathers in the Field at Fairview Baptist Church in Columbus, Mississippi. You might remember his name as I wrote about his field Buddy Devin in April of this year (click to read).

When asked about his Field Buddy Jesse noted “Devin has gone through so much. So I focus on my role, which is to show Devin love through consistency and to lead by example. To be there when I say I will be; to show interest in him one on one; to listen as I lead; to encourage him to share with me both his hopes and his fears. I want to be someone in his life that he can count on. I want him to see his value to our Heavenly Father.”

So Jesse leads by example, even to the point of reconciling with his earthly father. After starting to mentor Devin, Jesse mustered up the courage to find his own father and to offer him forgiveness for abandoning him. Having done this very thing myself I asked “What prompted that after all this time?” Jesse responded, “It had been on my heart for years but if I am going to help Devin learn to forgive his earthly father I need to do it first. How can I expect my Field Buddy to do something I myself am unwilling to do?”

Because of Jesse’s example Devin’s life is changing for the better. During our conversation about these changes Jesse shared this story. 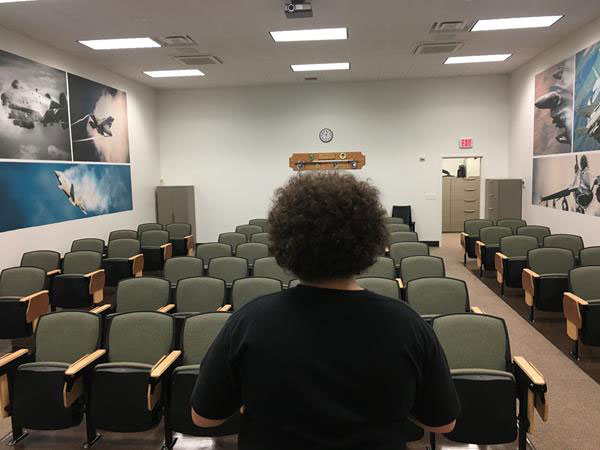 “Being a part of a squadron doesn’t fit easily into the mindset of an 11 year old boy. So on a weekend in early 2018 I brought Devin into the auditorium where the commander addresses the whole squadron.

As we stood up front looking at the empty room I took the opportunity to help my friend who has been bullied so much in life find his voice. I asked him if he could ever talk to a group of people in a room like this. He said no. I asked him to go to the podium and speak to an invisible crowd, tell them about his favorite video game. He stood at the podium; head held high and told the room of invisible people about the game. I saw him start to change from a scared boy to a young man who could accomplish anything.”

Showing him how to navigate a difficult and dangerous world; through the power of his Heavenly Father and with the help of a squadron of Christian brothers at Fairview Baptist Church. I told you he was a hero.

Are you leading by example? Think of all the fatherless boys whose lives could be changed by your example! Join with us today, we are only a phone call or email away.